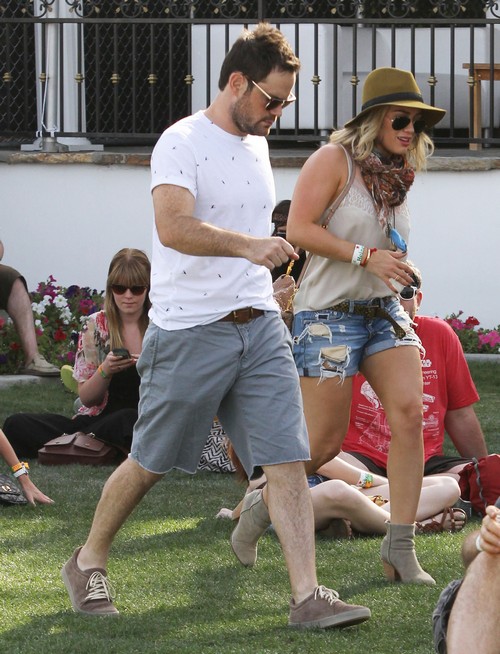 Hilary Duff and Mike Comrie are supposed to be finalizing their divorce, but are instead spending all their time together, doing very couple-y things. The ‘former’ couple has been spotted at the 2014 Coachella music festival, two days in a row. They claim that they’re only friends and that they’re trying to keep an amicable relationship for the sake of their son, Luca. While that may be true, I don’t think any couple that’s in the throes of divorce would be spending every waking minute together, doing everything from grocery shopping, holding hands, and attending music festivals together.

Seriously though, how is attending Coachella supposed to help with their separation? Are they going to be working on their ‘communication skills’ around a thousand other music-loving party-going people? Are they going to sit in the middle of a set by MGMT and open up about their parenting skills and custody issues? Puh-lease. If these two don’t get back together, I’ll eat my hat.

We’ve all seen celebrity couples who claim that they’re breaking up only to get back together just a few weeks later. I’m sure Hilary and Mike don’t want to rush into anything too quickly, and they’re probably testing the waters with their reconciliation before doing public with it. However, if they don’t want the media to think that they’re back together, maybe they should have thought about it before they went to Coachella together. There are a LOT of paparazzi at that festival, always scouting for celebrities – and Hilary and Mike didn’t even do a great job of going undercover.

What do you guys think? Are Hilary and Mike going to get back together for good? Let us know your thoughts in the comments below.