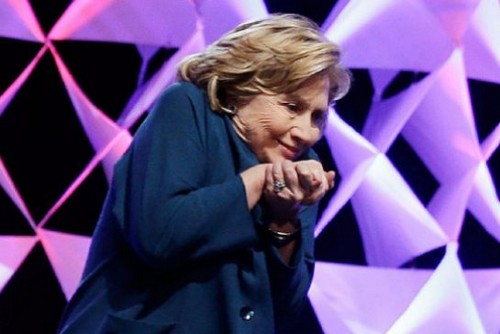 Hillary Clinton seems to have angered some of her possible future constituents. While in Vegas today for the Mandalay Bay for the Institute of Scrap Recycling Industries, Clinton had a shoe thrown at her by an angry woman. This incident obviously recalls the one where former president George Bush got two shoes thrown at him by an Iraqi journalist in 2008.

Clinton manages to take the whole with with a lot of grace and humility. After dodging the shoe and watching the woman get dragged away by the secret service, Hillary manages to crack a joke to the audience.

As the video shows us at first Clinton seems confused. Then, she jokes about the whole thing being part of Cirque du Soleil. However, this bring us back to the issue – why throw a shoe at Hillary Clinton in the first place? However, it seems like Hillary’s somehow received this woman’s ire over something, but since we don’t have a the identity of the shoe thrower, it’s impossible to speculate over the reasons for her behavior.

What do you guys think? Was this woman just looking for her fifteen minutes of fame, even though throwing a shoe at a Presidential candidate is an idiotic way to do it? Let us know your thoughts in the comments below.