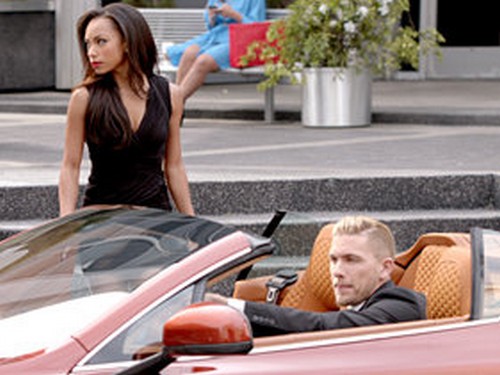 On the last episode in the Season Two premiere, All-Star Ahsha heated things up with Derek, and clashed with both Jelena and new boss Sloane. Pete’s thrown by the arrival of estranged wife Lionel, and the Devils broke ground on their new arena.  Did you watch last week’s episode?  If you missed it we have a full and detailed recap, right here for you.

On tonight’s episode Ahsha and Derek struggle to keep their relationship secret. Meanwhile, Sloane’s investigation into Oscar intensifies, German and Derek square off, Pete and Raquel go public, and Zero sets his sights on Jelena.

Tonight is the second episode of Hit the Floor, it’s returning with its usual Hit the Floor drama that you won’t want to miss, be sure to stay tuned for our live coverage of the show tonight at 9PM EST! While you’re waiting for our recap hit the comments and tell us what you think about the second season of Hit the Floor so far.

Tonight’s episode of Hit The Floor picks up where we left off, just a day after Olivia’s body was found at the groundbreaking ceremony.

Meanwhile Oscar is panicking over all of the bad press Olivia’s death has caused, he tells his son Jude to make sure no one is giving up any Devils business.

German reports to Coach Davenport and he shows him his office and tells him to study the tapes, before he rushes off.

Coach Davenport sits down with Ahsha and reveals to her that he is dating Raquel, he wanted to be the first to tell her. Ahsha tells her Dad that Raquel deserves to be happy, and if she is happy then Ahsha is okay with it.

Ahsha pays her Mom Sloane a visit, and helps her mark down the performance space for their show. Sloane decided not to cancel it, because it was important to Oscar, and Jelena obviously got inside her head.

Ahsha runs into German in the hallway, and he thanks her for giving her Dad the okay to hire him. Derek arrives and taunts German, and tells him he can’t wait to “watch the magic up close.” After German leaves Ahsha begs him to “be okay with German working there.” He promises that he will “play nice.”

It’s time for the Devil Girl’s show. Oscar is delighted to see Lionel arrive, but she makes a beeline to Jude and informs him that she is leaving because he was supposed to keep Coach Davenport and Racquel on the down low. The girls’ performance goes off without a hitch, and afterwards every one mingles and drinks.

Afterwards Sloane ran in to Olivia’s old assistant Sarah, she asked Sarah to come work for her but Sarah informed her that Oscar fired her, and he had fired Olivia as well. He also wiped out all the files on Olivia’s computer to “mess with her.” Sarah thinks Olivia was going to the groundbreaking to curse Oscar out before she got murdered.

Afterward Zero tries to get Jelena to fly to Cabo with him on his private jet for the night. She tells Zero to “Tweet her the pics” and walks away.

The next day Zero gives Jelena a ride to the church for Olivia’s funeral. Oscar pays his respects to Chase and apologizes for his loss. Lionel arrives at the church and is furious to see that Coach Davenport has brought Raquel along. Jude tells her to “give it time.” Jelena finally arrives at the funeral and gives the eulogy, halfway through she begins giggling and acting strangely, trying not to cry. Zero interrupts and stands up and says a prayer, saving Jelena the embarrassment. After the funeral ends, Jenela and Zero sneak in to the confessional and have sex. The rest of the funeral procession heads to the cemetery to lay Olivia to rest.

After the funeral Raquel and Ahsha talk and Ahsha slips up and mentions her Dad and Sloane. Raquel freaks out and informs him she isn’t going to be his side chick, and then storms off. Lionel and Jude watch on, obviously proud of their work.

While they are lowering Olivia’s casket in to the ground Jelena catches Ahsha and Derek holding hands. A swarm of cops marches into the cemetery and arrest Chase for murdering his wife Olivia, they drag him off in handcuffs while he argues that he is innocent.