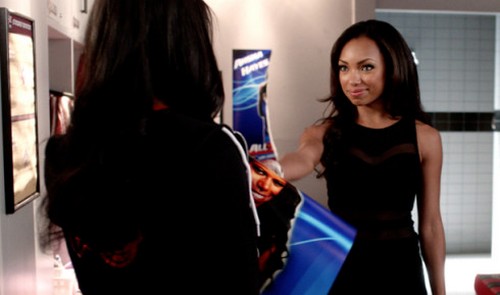 Tonight on VH1 HIT THE FLOOR airs with a brand new episode called, “Game Changer.” On tonight’s show Ahsha heats things up with Derek, and clashes with both Jelena and new boss Sloane. Pete’s thrown by the arrival of estranged wife Lionel.

If you did not watch the show it follows the lives and loves of the Los Angeles Devil Girls, the premiere dance team in all of professional basketball. At its heart is Ahsha, a sheltered young woman who joins the team against the wishes of her mother Sloane, who knows this treacherous, tempting world all too well having been a Devil Girl herself. Olivia is the shrewd squad manager, Jelena is the star dancer who won’t let anyone else share the spotlight and Pete Davenport is the former All-Star who’s come back to coach his old team.

On tonight’s episode in the Season Two premiere, All-Star Ahsha heats things up with Derek, and clashes with both Jelena and new boss Sloane. Pete’s thrown by the arrival of estranged wife Lionel, and the Devils break ground on their new arena.

Tonight’s episode of Hit The Floor kicks off with a Devil Girls rehearsal. Sloane arrives and Jelena introduces herself as Captain. She tells Jelena to go stand with the other girls, and she gives them a speech telling them that she has an “open door policy” and they are all welcome to come to her with any problems. Afterwards Jelena informs her that she is supposed to be running a business, “and this can’t be all rainbows.”

Oscar reveals to Peter that he has solved the problem of Ohio’s small forward that he was worried about, he bought him for their own team. After the press conference Oscar introduces him to their new player, Zero.

Raquel barges into Peter’s office and announces that she has been promoted and “she is running the playground now.” She wants to celebrate by having sex in his office.

Oscar congratulates Zero’s manager Jude on bringing him over to the team, Jude thanks him and calls him Dad. Oscar gives him a dirty look and he corrects himself.

Ahsha heads into Sloane’s office and Sloane asks her where she is sleeping these days. She is not happy her Mom took a job to look over her and meddle in her business. She says Jelena isn’t her problem, her Mom is.

Jelena heads to Oscar’s office and demands that Sloane is sent packing, and reminds him that she is part owner of the team. He informs her that Sloane isn’t going anywhere, he needs her for good press. Jelena storms out after she informs him he is going to regret hiring her.

Peter heads into his office and finds German waiting for him. He tells German he “doesn’t want to get involved in Ahsha’s business.” German informs him that he is there for himself, not Ahsha. He announces that he is leaving LA, he wants to be a high-school basketball coach and could use some recommendations and wants Peter to put in a good word for him.

Derrick and Ahsha are chatting before practice, he wants her to officially move in with him since she is homeless. She lies and says she can’t since she is moving in with Kyle.

Oscar finds his wife waiting for him in the boys’ locker room. She announces that she is using their courtside tickets, the divorce isn’t final and she still owns 50% of the seats.

Jelena wanders through the weight room, and finds Zero working out alone. She informs him she knows he is a fraud and corrects him when he rambles off a biblical verse. She threatens that she has a boyfriend, but he corrects her and reminds her she has an ex-boyfriend.

Ahsha packs up her bags and heads over to Kyle’s apartment with her. Kyle walks in and finds a guy named Bo sitting on her couch. He reveals he is her husband Benny’s loan officer and Benny owes him over $100,000. She kicks him out, but he advises her to call him.

The next day Ahsha goes for a job with her Dad, and he fills her in on his nasty divorce. He lets the cat out of the bag and tells her that German visited him and is planning on leaving LA. He looked at his work and he wants to offer him an assistant coaching position on his team. Ahsha says she would be okay with that.

It’s almost game time, and Peter bumps into Sloane and realizes how nervous she is. Sloane wants Peter to know that she isn’t angry with him, and she doesn’t want to keep ignoring him. His soon to be ex-wife Lionel makes her grand appearance, and Pete runs off. Lionel shares an awkward run-in with Sloane.

The Devil Girls take the floor and perform their pre-game routine. Afterwards Sloane and Jelena have a run in. Sloane announces she “isn’t Olivia.” And, Jelena agrees, because “Olivia knew what she was doing.” She threatens Sloane and tells her that the second she screws up, she is going straight to Oscar to tell him about it.

The devils win their game, and everyone heads to the after-party. Jelena tracks down Zero and informs him she has changed her mind and wants to go out on a date with him.

Terrence heads to his doctor and she informs him he needs knee surgery. He argues that he can’t sit out for surgery because this is the only opportunity he has to get a ring. His doctor explains that he could blow out his knee if he doesn’t get surgery and his career will be over.

Ahsha heads over to Derick’s house and tells him that if people find out about their relationship she will lose her own career. Despite that, she wants to be with him as long as he promises to keep it a secret. He picks her up and pulls her into the hot tub with him and kisses her.

Oscar holds a press conference for the ground-breaking of the Devil’s new Hollywood arena. He digs a shovel into the soil to signify the beginning of construction, and he unearths Olivia’s dead body.