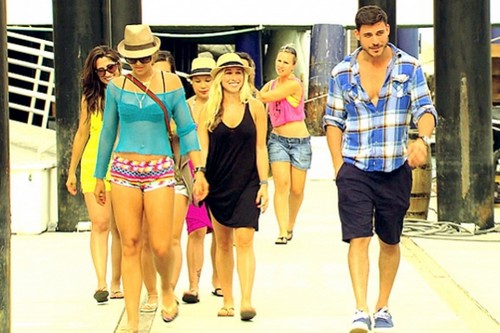 Tonight on Bravo VANDERPUMP RULES continues with a new episode called, “The Ultimatum.”  On tonight’s episode Jax brings dates to Stassi’s booze cruise, while Kristen gives Lisa an ultimatum she might not accept.  Did you watch last week’s show?  We did and we recapped it right here for you.

On last week’s show Lisa’s staff headed to Cabo for Stassi’s 25th birthday, but a vulgar comment from Scheana turned the celebration into a catfight. When a drunken argument ended with a drink thrown in Katie’s face, Stassi lashed out at her friends for taking the spotlight away from her birthday.

Tonight’s episode is going to be another drama packed one, which you won’t want to miss. So be sure to tune in for our live coverage of Bravos’ Vanderpump Rules Season 2 episode 11— tonight at 10PM EST! While you wait for our recap, hit the comments and let us know how excited you are about the new episode of VR tonight and check out the sneak peek video below of tonight’s episode!

Tonight’s episode of Vanderpump Rules picks up where we left off last week, in Mexico. Kristen chases down Katie after she storms out of Stassi’s birthday dinner, and tries to talk to her. Stassi is “pissed” that her friends are ruining her birthday. She storms out of dinner to yell at Katie, she tells her “I am so pissed and upset with you. Can you please act like it is my birthday? You left me, you didn’t even order a drink or an appetizer. You’re f—–g selfish!” Katie is still upset with her boyfriend Schwartz for pouring a drink on her, and she tells Stassi she “is being cruel.”

Katie heads upstairs and Schwartz follows her. He tells her that he is “sorry for being a drunk ass.” He agrees to change the way he is behaving, as long as Katie puts their drama aside and “enjoys herself tonight.” Katie accepts his apology, and tells him he “is everything” to her.

Back at Sur, Ariana is tending bar. She is perfect okay with not going to Mexico, she says she “would rather be at Sur pouring shots than having Kristen dumping shots on her.” Lisa is impressed with how smoothly everything is running with half of her staff in Mexico.

Stassi is lying in her bed having a meltdown. Kristina, Stassi, and Kristen are determined to get Stassi out of bed. Stassi decides they “need to rally and make something of the night.” So, the girls hit the pool and have some drinks. Meanwhile all of the guys, Jax, Tom, Schwartz, Shay, and Peter have some drinks. Jax decides he wants to check on Stassi and make sure she is having a good time.

Stassi heads to the shallow end of the pool to chat with Jax. Jax thinks they are finally starting to be friends. Stassi informs him that they can’t be friends because he is a liar. He told her before that Tom hooked up with Ariana, and now he is denying it. Stassi thinks he needs to “man up” and “tell the truth.” Stassi tries to convince him to throw Tom under the bus and tell Kristen the truth about Tom and Ariana.

After the pool Stassi tells her friends that Jax confessed to her that Tom and Ariana hooked up. She heads outside to break the news to Kristen. She tells Kristen that “Jax admitted Tom and Ariana hooked up in Vegas.” Kristen begins balling her eyes out, and Stassi gives her a pep talk about how Tom is a liar and a cheater. Kristen cuddles up on the couch with a bottle of tequila.

They all head down to the pool, and Kristen calls Jax over to talk to her in private. She asks him about Tom and Ariana. Jax tells her he “doesn’t know anything for sure.” Stassi calls him out in front of everyone and calls him a liar. Tom flips on Jax for lying about him and Ariana. Kristen flips on Tom, she is convinced now that Tom has definitely hooked up with Ariana. Kristen begins blubbering in front of everyone and begging Tom to tell her the truth. Tom sticks to his story that he never hooked up with Ariana, and Kristen storms off. She says she “can’t be here anymore.”

Despite Kristen’s meltdown, Stassi, Kristina, and Katie enjoy the pool and order drinks. After twenty-minutes Kristen comes back and announced she is going to give Lisa an ultimatum. She calls Lisa and tells her that she has to make a decision, either Ariana goes or she goes. If Lisa doesn’t fire Ariana, then Kristen is going to quit. Lisa tells her they will talk about it when she gets back from the trip. Kristen hangs up and announces to her friends that she is moving out of her apartment and leaving Tom.

They head down to the dock and board a boat with their own private bartender. Kristen proceeds to get wasted, while Tom sulks and watches her from a distance. After several drinks the group realizes that Jax isn’t with them. All of a sudden Jax appears walking down the dock, followed by a flock of girls (literally ten girls). He boards the boat, and helps all ten of his new friends up onto the boat. Stassi tells him he has to leave her birthday boat, so he takes his parade of women with him. The girls are sweet enough to wish Stassi a happy birthday as they leave though.

After Jax leaves the group decides to play spin the bottle. Schwartz and Tom kiss, and then Scwartz announces he “kissed a guy and he liked it.”

Back at Sur, Lisa pays Guillermo her business partner a visit. Lisa reveals that Kristen gave her an ultimatum. Guillermo says Lisa should have told Kristen to “stay in Mexico.” Lisa calls Ariana in to talk to her and Guillermo. Lisa tells Ariana that she is more than welcome to head back to Villa Blanco (the other resturant). Ariana shoots that idea down and says she doesn’t want to leave Sur, she is settled in. It’s not looking good for Kristen.

Back in Mexico the whole group is heading out for drinks at a bar. Kristen is still giving Tom the cold shoulder and completely avoiding him. Jax arrives at the bar, this time he has only brought three girls, instead of ten. He heads over to Stassi, and she tells him to “get away,” and that he is “not welcome here.” Jax is flattered, he thinks that Stassi still cares about him. Jax ditches the bar, and heads back to the hotel with his new friends.

Scheana and Stassi have a heart to heart at the bar. Scheana declares Jax is “scum.” And, Stassi is humiliated that she dated him. The girls decide to bury the hatchet…again. Stassi thinks that Scheana has proven to her that she wants to be friends throughout the trip.

Kristen and Katie head to the bathroom, and Katie reminds her that she is supposed to be breaking up with Tom tomorrow. Katie tells her that she can only support her if she makes the “right decision” and dumps Tom.

The next morning Katie and Stassi can’t find Kristen, they find her in bed with Tom. Stassi says “way to stay strong” and Kristen tells her to “go f—k herself.” Stassi and Katie are not happy that Kristen went crawling back to Tom after she said she was leaving him.

Everyone starts packing their bags so they can check out of the hotel. Katie and Stassi flip out on Kristen and tell her she is “pathetic.” Stassi has never seen someone “so weak in her entire life, and she has lost respect for her.” After their screaming match, every one checks out of the hotel, to head back to California.