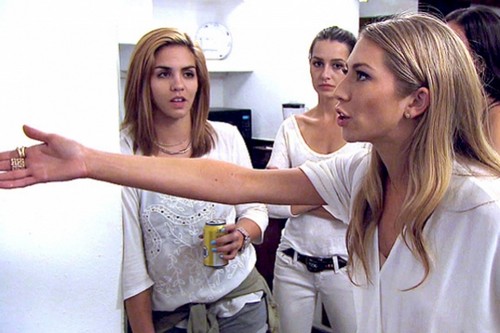 Tonight on Bravo VANDERPUMP RULES continues with a new episode called, “Sur of the Border.”  On tonight’s episode Stassi’s birthday is once again beset with drama, this time spurred by a crass comment from Scheana. Did you watch last week’s show?  We did and we recapped it right here for you.

On last week’s show when The Real Housewives of Beverly Hills gathered for a dinner party at SUR, Stassi and Jax witnessed firsthand that Lisa’s high-class friends could be just as spiteful and vicious as their own. Kristen’s obsession over rumors that Tom was hooking up with the pretty new bartender leds to a five-girl shouting match on the night of Lisa’s dinner.

On tonight’s show Lisa’s staff heads to Cabo for Stassi’s 25th birthday, but a vulgar comment from Scheana turns the celebration into a catfight. When a drunken argument ends with a drink thrown in Katie’s face, Stassi lashes out at her friends for taking the spotlight away from her birthday.

Tonight’s episode is going to be another drama packed one, which you won’t want to miss. So be sure to tune in for our live coverage of Bravos’ Vanderpump Rules Season 2 episode 10— tonight at 10PM EST! While you wait for our recap, hit the comments and let us know how excited you are about the new episode of VR tonight and check out the sneak peek video below of tonight’s episode!

Tonight’s episode of Vanderpump Rules opens with Stassi and her friend Kristina shopping, Stassi is annoyed that Jax is coming to Cabo for her birthday, she never invited him. He invited himself.

Lisa and Peter are shopping too, for restaurant supplies. Lisa is annoyed because every time she buys something nice like salt and pepper shakers for the restaurant, customer steals them. Peter reveals to Lisa that he is going to Cabo with Stassi, Tom, Schwartz, Sheana, Scheana’s boyfriend Shay, Kristen, and Katie.

Stassi and all of her friends head to meet up at the airport. Scheana is nervous about going to Cabo since she isn’t getting along with anyone, but she had already bought the plane tickets and booked the hotel months ago, so she decides to go anyway.

After their flight, Stassi and her friends arrive in Mexico. They hit the first bar they see when they walk out of the airplane. There are two cars waiting for them when they leave the airport. They decide one car is for boys and one car is for girls. Scheana jumps in the boys’ car, and declares “I would rather be gang banged by all five of you guys than ride in the girls’ car.” Meanwhile in the girls’ car Stassi is ranting about why Scheana even came on the trip, if she doesn’t want to be around any of the girls.

The group arrives at the hotel, and are instantly serves margaritas. The server reveals that their boss Lisa called them and upgraded their hotel rooms. Stassi is pumped, and claims that “for the first time ever her birthday is living up to exactly what she wanted it to be.”

Back at Sur Lisa is meeting with her business partner Guillermo. They are looking for the highest-quality food, that they can serve at the lowest price. While Lisa is taste-testing steaks she receives a phone call from Stassi thanking her for the hotel suite.

Peter, Jax, Tom, and Schwartz are getting dressed to go out. Scheana and Shay join them in their room to pre-game with them before they head out. Jax heads to the girls’ suite to see if he can borrow a blow-dryer. Jax tells Stassi, Kristen, Katie, and Kristina what Scheana said about getting gang-banged. Stassi is annoyed. She feels like Scheana has disrespected her, and she is mad that Jax didn’t stick up for her. After Jax heads back to his room Stasso declares she is on a mission to make Scheana’s trip in Mexico a living hell.

Stassi and her friends head out to a club called “Pink Kitty.” Jax and Schwartz hop on the stripper pole, meanwhile Stassi is determined to make Scheana feel uncomfortable. Kristen warns Scheana that she doesn’t want her at their table or drinking their alcohol, and she threatens to get security to escort her out of Pink Kitty. Katie has gone nuts, and turned into a hot drunk mess. She starts arguing with her boyfriend Schwartz about handing Scheana a drink. Scheana feels guilty that Stassi isn’t having a good birthday, she says good-bye to her and leaves with her boyfriend. Stassi is stuck at the bar with “Tequila Katie” and raging birth Kristen. Everyone heads inside and leaves Katie and Schwartz outside to argue. Katie is a hot mess and screaming in Scwartz’s face, so he dumped a beer on her head. Katie plays the victim and cries to Kristen and Stassi about what Tom did.

Lisa’s business partner Nathalie joins her and her husband Ken for dinner at her house. Lisa tells the story about how she met her husband Ken, and how “naughty” he used to be when they were younger. Ken brags about how he used to sleep with three or four women every night.

The next day Stassi and her friends head out for more birthday activities in Cabo. Schwartz tries to make amends with his girlfriend Katie, but she doesn’t want to hear it, she thinks he isn’t being sincere. They all pile into a boat, and head out to a more secluded beach. Scheana and Shay stand off to the side and watch everyone have a great time. After the beach they head out to lunch at a restaurant on the beach. Peter gets called up on stage to judge the wet t-shirt contest, and gets lap dances from the “skanks.”

After lunch they head back up to their hotel rooms to get dressed for Stassi’s birthday dinner. Stassi takes Katie aside and pleads with her to be on her best behavior. She doesn’t want any drama at her birthday dinner. Katie assures her there won’t be any problems.

The group meets up for dinner, and Jax surprises Stassi with a present. He actually picked out some really cute clothes for her. Scheana asks Schwartz what happened last night, and opens up a can of worms. Katie and Schwartz start arguing again about the drink he dumped on her. He tells her to stop “acting like a moron.” Katie tells Stassi she wants to leave, and Stassi snaps on her. She is supposed to be her best friend, and she bails on her birthday dinner, Katie walks out of the restaurant.