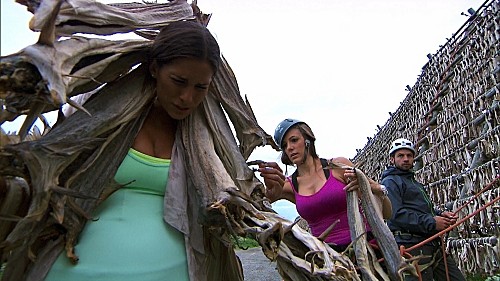 Tonight on CBC their Emmy award winning show THE AMAZING RACE continues with a new episode.  On tonight’s episode called “Beards in the Wind”  the race the race continues in Svolvaer, Norway, where teams plunge into the Arctic.  Did you watch last week’s episode 3?  If you want to know what happened, we have a full and detailed recap, right here for you.

On last week’s show in Lisbon, Portugal, one team took a huge risk in the hopes of a big reward, and racers got medieval in a knightly Road Block.  On last week’s show Chester & Ephraim arrived in Lisbon and Phil met them at the airport, they were eliminated from the race because all the other teams reached the Pit Stop.

On tonight’s show teams travel to Svolvaer, Norway where Racers plunge into the Arctic. Also, Tim and Marie face a tough decision when confronted about the Express Pass.

RECAP: Nicole & Travis won the last leg and now they are heading to Svolvaer, Norway to the Arctic Circle. The first stop is a travel agent and they get an 8:00 am flight, the first and only one; everyone is on the same flight, they have all caught up with each other.

Ally & Ashley are so excited but they are frozen and finds it strange that the sun never sets in this part of the world. Teams are now on a boat heading to Svolvaer after landing in Norway. It’s a Detour, “Hang Your Heads” requires teams to string ten bundles of six fish each, then hang them out to dry vs. “Hammer of the Cods” is where teams have to collect cod that is drying. Tim & Marie choose to make the fish bundles, while other teams are just waiting around for cabs and there are not many because it is 11pm at night. Brandon & Adam don’t wait for a cab, they walk the distance and are now with Tim & Marie making fish bundles; the other teams are wasting a lot of time looking for cabs.

Leo & Jamal have arrived and are making fish bundles as well. Ally & Ashley are there as well, but both are having a hard time at how gross the task is. Tim & Danny meanwhile decide to do the other Detour and head to the racks of drying cod. Nicole & Travis are tying bundles of fish, this detour is the most popular, but Nicky & Kim decide to join Tim & Danny at the cod racks.

Jason & Amy are the first team to finish hanging their fish heads; Brandon & Adam, Jason & Amy are next and all are now headed on high speed RIB boat to Henningsvaer, Norway.

Tim & Marie are so confused, three teams have past them and they don’t know why they can’t pass the Detour. Finally Marie figures out that they just put the fish heads on the wrong pole, simple as that.

Tim & Danny have delivered their cod and are on the last part of the Detour. Ally & Ashley are hanging their fish heads while Leo & Jamal have also finished after a grueling Detour since their wheelbarrow got a flat tire.

Jason is the second person to plunge, but he has a hard time grabbing the ball that he needs to let go. Jason finally grabs and is let go into the frigid waters. Tim is next and Marie is happy when he carries it off.

Meanwhile, Nicky & Kim have just delivered their cod and now have to remove all the cod meat; Tim & Danny are finished with their cod and are on their way to the Roadblock.

Brandon & Adam have arrive at their Ford Ranger, they attached their chain to the hitch and the boulder.

Jamal plunges into the frigid waters, he and Leo are in 6th place.

Brandon & Adam are done, they must now drive themselves to the Viking Longhouse where they will find the Pit Stop for this leg of the race.

Brandon & Adam have arrive at the Pit Stop and are in first place, they have won $5,000.00 each; the other news is, they are still racing.