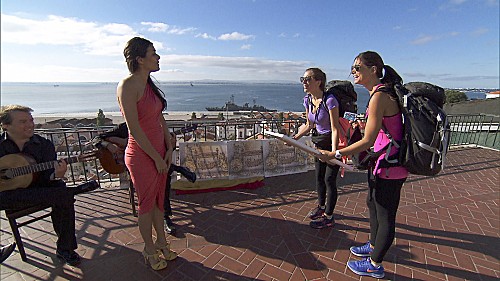 Tonight on CBC their Emmy award winning show AMAZING RACE continues with a new episode.  On tonight’s episode called “King Arthur Style”  the race continues in Lisbon, Portugal, where one team takes a huge risk in hopes of getting a big reward.  Did you watch last week’s episode 2?  If you want to know what happened, we have a full and detailed recap, right here for you.

On last week’s show the racers strip down and muscle up for a bizarre salt bath in Santiago, Chile. Meanwhile, one team’s communication blunder at a bus stop could prove costly.  Rowan & Shane were the last team to arrive and they were eliminated from the game.

On tonight’s show in Lisbon, Portugal, one team takes a huge risk in the hopes of a big reward, and racers get medieval in a knightly Road Block.

RECAP: Chester & Ephraim arrived first in the last leg, so they are the first to depart and on their way to Martin Moniz Square in Lisbon, Purtugal. All the other teams are starting to head to the airport as well. There is a 7:00am flight that a few teams are on. Chester & Ephraim are upset that they were supposed to be on the 7:00am flight, but the agent made a mistake; the agent then feels so bad, she gives them a ticket with two connecting flights, but they will arrive 5 hours before that first flight if all goes well. Chester & Ephraim soon run into trouble and find that one of their flights are delayed. Nicky & Kim in Sao Paulo are trying to get on the 5:00pm flight, they have themselves on a waiting list. In Buenos Aires, Chester & Ephraim finally got their final flight, but it is also delayed. In Sao Paulo other teams are also trying to get on a standby flight.

Brandon & Adam, Tim & Danny are in Lisbon and hope the other teams are far away from the them. Teams must now find a clue in a painting to find out their next destination; a coach museum. At the museum, teams must match up their painting with the right coach and once they do that, it is a Detour. In the Detour teams have to choose between Tiles and Miles. In Tiles teams have to put together a life size puzzle with lots of delicate pieces. In Miles teams have to use a navigation system to measure distances.

Nicky & Kim choose to make the puzzle, they have no idea what the figure should like like and just do their best. At the London Airport, Chester & Ephraim are on yet another flight to Lisbon.

Nicole & Travis are in first place and now head to the Road Block slings and arrows where one of them have to put on a knight suit of armor and do some slinging. After that it is on to the Pit Stop at Castelo dos Mouros.

Brandon & Adam are doing the puzzle, Tim & Danny have chosen the navigation system.

Nicky & Kim are team number three at the Pit Stop, they have really moved up from the back to the front of this game. Tim & Danny are now doing the slings and arrows while Leo & Jamal are over thinking the navigation system.

Brandon & Adam are team number five at the Pit Stop. Ally & Ashley have just finished their puzzle, while Leo & Jamal have also finished. Tim & Marie are just starting their puzzle and are only giving it an hour, or they will use their Express Pass.

Chester & Ephraim arrive in Lisbon and Phil meets them at the airport, they have been eliminated from the race because all the other teams have reached the Pit Stop.