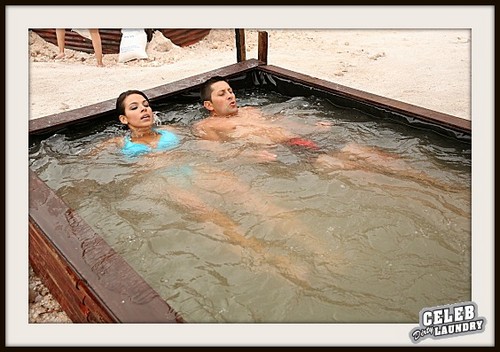 Tonight on CBC their Emmy award winning show AMAZING RACE continues with a new episode.  On tonight’s episode called “Zip It, Bingo”  the race continues in Santiago, Chile, where teams take a bizarre salt bath.  Did you watch last week’s season premiere?  If you want to know who won, we have a full and detailed recap, right here for you.

On last week’s show we met this season 11 new teams, each comprised of two members, and they will be pitted against each other on a trek around the world for approximately 25 days.  On last week’s show with the Double Express Pass on the line, teams depart for their first destination, Iquique, Chile, where one racer must face their fear of heights.  By the end of the episode the first team eliminated was Naina & Hoskote.

On tonight’s show racers strip down and muscle up for a bizarre salt bath in Santiago, Chile. Meanwhile, one team’s communication blunder at a bus stop could prove costly.

Tonight’s The Amazing Race Season 23 episode 2 is going to be exciting, and you won’t want to miss. So be sure to tune in for our live coverage of The Amazing Race — tonight at 9 PM EST!  While you wait for our recap, hit the comments and let us know how excited you are that The Amazing Race is returning!

RECAP: Tim & Marie are thrilled that they have an advantage and are the first to leave but all the other teams soon catch up with them. Teams are in Chile and have to head to the Irlanda Mine; they have to choose between a Detour of Brining and Mining and they have to bike ride to the task. Nicole is having a hard time with the bike riding, she actually falls over.

Brandon & Adam are now in first place, they have decided to do the mining and have to chip away at a huge rock of salt to find their next clue. Ally and Ashley start the mining but soon head to the Brining where they first have to carry heavy bags of salt and put them into a hot tub. Tim & Danny are trailing behind and they are not the only team, Rowan & Shane are in last place after a failed taxi ride.

Brandon & Adam are the first team to get their clue and they now have to take a one hour bus ride back to Santiago, Chile and find Plaza De Amas. Jason & Amy are the first team to finish with the Brining and head to Santiago as well. Ally & Ashley finally finish their Brining and are in seventh place at the moment. Tim & Marie have gotten themselves on a later bus. Nicky & Kim are finally on their way to the bus station as well. The bus ride is 24 hours long. Rowan & Shane soon realize that if they take a later bus that they will actually get their earlier because their are less stops on their buss…oh no, they made a mistake due to a communication barrier and they are way behind all the other teams as a result.

Rowan & Shane are in a huge panic, they have tickets, but they are going to be arriving much later than all the other teams.

Jason & Amy find the next clue and it’s a Road Block where they have to find a shoeshine cart and shine some shoes, then take everything with them to this storage area and the unit needs to be packed correctly or they will not get the next clue.

Tim & Marie find out that Nicky & Marie know people in the same circles, an alliance is born.

Teams must now head to Cascada De Las Animas; Leo & Jamal are in the race for first place against Chester & Ephraim. Leo & Jamal are the first team to arrive but they need to settle their cab bill before they can be checked in. Chester & Ephraim are the second team to arrive, however the first team did not pay their cab bill, so they are officially team number one; they have one a trip to Turks and Caicos.

Leo & Jamal arrive at the Pit Stop to find that they are officially team number two; the two are furious with each other and start fighting in front of Phil.

Ally & Ashley are having a hard time while Rowan & Shane have seem to have caught up with some of the other teams, but soon find out they they have chosen a man’s shoe shining cart that was not a part of the task.