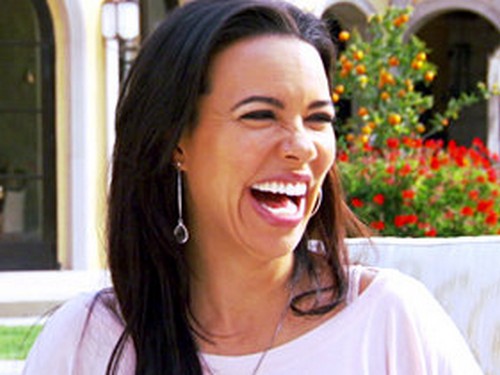 Wednesday night means that it’s time for VH1’s HOLLYWOOD EXES! On tonight’s new episode Nicole plans a trip to Hawaii with the ladies, but Drea and Shamicka refuse to go if Jessica is invited. Meanwhile, Shanna addresses her fear of flying by reaching out to a therapist.

On last week’s episode the drama continued, the women decided to give Jessica the chance to explain how Shanna’s bombshell happened; Mayte was maternally worried, she was concerned about her ability to have children. Drea found out the harsh reality of life as it hit her in the face.  Did you watch last week’s episode?  If you missed it we have a full and detailed recap, right here for you.

On tonight’s episode Nicole wants all the women to join her on a trip to Hawaii, but Drea and Shamicka refuse to go if Jessica is invited. Shanna checks in with a therapist to work through her fear of flying.

Shanna wanted to get the enviable thigh gap so she went to Dr. Rollins for airbrush laser liposuction treatment. And Mayte being the goof friend that she is went along to offer support.

Shanna really wanted this procedure and if she hadn’t burned her bridges with Jessica, then she would have even had another procedure done on top of this one. She was thinking about possibly doing her boobs, but now that she can’t go to Jessica’s ex-husband (out of fear for what he’ll do to her under the knife) she’s written it off.

The liposuction was quick and easy. Plus, Shanna is going to be grateful she had time to do it seeing as Nicole is planning a big girls’ vacation to Hawaii. Everyone is invited …. though some of them won’t like the next part – Jessica will still be invited to come.

But before she gets her invite, her friends want an apology and an explanation. So Jessica went by Nicole’s for a sit-down with Sheree, Mayte, and Nicole.

They didn’t want a half-ass apology again or more of her “poor me” excuses. This time they wanted her to hear how they felt when they read the text and for her to be genuinely sorry for the way she had inadvertently hurt them. And still, despite their best intentions, they got nowhere. Jessica was either incapable of giving a heartfelt apology without a smirk/laugh or she just wasn’t taking them seriously. Causing her friends to get mad and go as far to detaining her in order to stop her from running away.

Yet she found a way to escape. Rather than, you know, stay to listen to anyone besides herself and to be honest she might have lost out on some valuable friendships because of that. Mayte is forgiving – just no one is that forgiving!

Shanna is excited about the upcoming trip. However she does have a fear of flying which is why, prior to their take-off, she went to her therapist for some calming techniques. Not only has Shanna survived three hours of turbulence on a flight, but her ex-husband was also the sole survivor of a horrible plane crash. So the fear is very real for her and after talking to her therapist — Shanna believes she’ll be able to handle it.

The doctor told her to take her valium!

She took them and to give it an added boost she also had a few glasses of wine. Therefore, Shanna was knocked out for a good portion of the flight. But at least she made the flight. Andrea ended up missing it, running late as usual and had to take a second flight in. And Jessica was a complete no show. Nicole never heard back after inviting her over voicemail.

That’s good for the rest of the ladies. They weren’t all that enthused to see her anyways, but this is the first time Jessica has shut Nicole out. Not even during their worst arguments has that ever happen before.

Yet it isn’t merely Drea and Jessica that are missing out on a good thing. The house Nicole got in Hawaii is beautiful, though Mayte’s relationship problems with Umberto are troubling her. He’s been distant with her lately and she wants to know what’s going on with him. Why is he suddenly pulling away when weeks ago they were discussing having kids?

As for the rest of their first night, Sheree proved to be a lightweight. She got drunk before anyone else and had to go to bed first. Which is the worst thing you can do at a slumber party.

The girls had originally found her vomiting from the bathroom floor and that wasn’t enough to stop them from pulling pranks. They drew all over her face and chest!