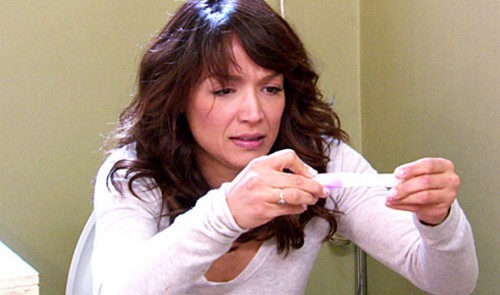 Wednesday night means that it’s time for VH1’s HOLLYWOOD EXES! On tonight’s new episode Jessica has some explaining to do in the wake of Shanna’s bombshell. Elsewhere, maternal concerns plague Mayte; and a harsh reality hits Drea.

On last week’s episode at Drea’s birthday party, the women grilled her about getting a pre-nup, causing Drea to meltdown and Brian to explode. Shanna shared her private text messages form Jessica, which threatened to tear the sisterhood apart.  Did you watch last week’s episode?  If you missed it we have a full and detailed recap, right here for you.

On tonight’s episode the drama continues, the women decide to give Jessica the chance to explain how Shanna’s bombshell happened; Mayte is maternally worried, she is concerned about her ability to have children. Drea finds out the harsh reality of life as it hits her in the face.

Andrea and Sheree were on a wedding outing. They were tasting wedding cakes and enjoying themselves when the infamous racist text came into their conversation. Jessica was supposed to be part of Andrea’s wedding, but after the bride-to-be read that Jessica said that “black girls and white girls don’t mesh”. . . that friendship ended officially.

Andrea is so upset and hearing the other things that Jessica texted hasn’t made the situation any better. She wants to lay a beat down on her former friend. Then again, other people don’t want to be as quick to pass judgment. Mayte wants to hear Jessica’s side because maybe her words were taken out of context. And anyways she knows her friend – Jessica has a history of saying inappropriate things.

Mayte shouldn’t even be worrying herself with what’s happening in the “Text-gate” situation. She should be focused on her baby-making. She and her boyfriend have been trying for a while now and they’re still not pregnant. Sheree was kind of relieved about that, but she didn’t pass that on to her friend.

Sheree thinks Mayte and Umberto should slow down on their baby plans. The relationship is still kind of new and Umberto doesn’t lives far away as in a plane ride away. So she thinks Mayte should see how her relationship goes before bringing a baby into the mix. Even Andrea’s future mother-in-law shares that opinion. When Andrea sought her support to getting Brian to reverse his vasectomy – Mama said no. Build a bond before adding obstacles!
A new marriage doesn’t need a baby!

Mayte though wanted to make sure that she was still fertile. She went to an OB/GYN because her mother went through early onset menopause. And the doctor told her she must have taken after her father’s side. Mayte can have kids, despite her age. So maybe that will take the pressure off of her and Umberto – they can wait!
Sheree wanted the confrontation with Jessica. She needed answers about the text and Mayte and Nicole wanted to hear those as well. But the meeting itself did not go well.

Jessica had ample time to prepare her answers. Nicole had told her what the meeting was about and yet Jessica could not give a clear answer or defense. She said she wrote that text when some black girls were hassling her for dating a black guy. Although that doesn’t explain the other things Jessica texted. Like when she said dating black men “deflects” or when she called Shamika a hood-rat. And so Sheree pushed her for answer which made Jessica so frustrated (with everyone) she got up and left.

Jessica didn’t defend herself at all and regardless of her “poor little me” act, her friends honestly don’t believe she’s a racist. Mayte and Sheree talked it over a few days later and they don’t think Jessica hates them or finds their friendship demeaning. They just think she’s just stupid!
Andrea was pushing aside the Jessica issue to focus on her upcoming wedding. Then the baby thing came back and the couple thought it would best to see a pastor. They went to Sheree’s husband, Terell. Terell was able to listen to the couple and surprisingly he managed to get to the bottom of Andrea’s frustrations.

Andrea had her kids with R. Kelly mostly by herself. She would work for him and the only recognition she would receive would be as someone’s mom. So that’s how she learned to identify herself. And Sheree could understand this dilemma because she was in a similar position. When she met Terell, all she had was her son and she had considered having another baby with her new husband. Her husband on the other hand didn’t feel like they should.

For years that caused resentment and that’s why she doesn’t want Andrea to go through the same thing. Andrea has to decide what she wants and if Brian doesn’t agree then he shouldn’t be expected to change his mind.

And though everyone wants to move on from what’s been happening (baby wise and text wise), when Shamkia found out – she wanted blood! Preferably Jessica’s!

With the group this split how is Nicole going to handle her girl’s weekend out of the country?