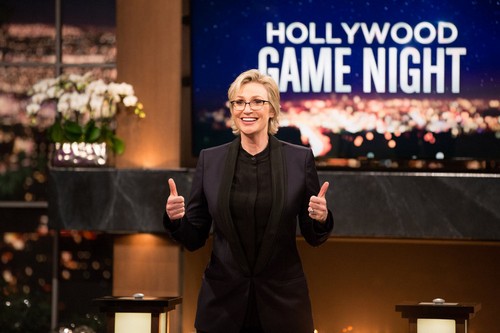 Tonight on NBC their show HOLLYWOOD GAME NIGHT airs with another new episode. On tonight’s episode called, “Off With the Top of Your Head” The party-game stars are Nate Berkus, Adam DeVine, Tony Hale, Arsenio Hall, Malin Akerman and Bradley Whitford.

On last week’s episode two contestants lead a team of three celebrities, which included Wendi Malick, Valerie Bertinelli, Jane Leeves, Mekhi Phifer, Billy Eichner and Andy Richter, in hopes of winning the $25,000 grand prize. A series of unique party games brought out the best, funniest and most competitive sides of some of Hollywood’s most beloved stars in this hilarious no-holds-bar competition hosted by Jane Lynch.

On tonight’s episode two contestants will lead a team of three celebrities, which include Nate Berkus, Adam Devine, Tony Hale, Arsenio Hall, Malin Akerman and Bradley Whitford in hopes of winning the $25,000 grand prize. A series of unique party games will bring out the best, funniest and most competitive sides of some of Hollywood’s most beloved stars in this hilarious no-holds-bar competition hosted by Jane Lynch.

Hollywood Game Night is still sort of a new concept, but it’s swiftly catching on. Because truthfully where else can you find celebrities making complete fools of themselves than on late night TV.

As matter of fact the whole premise of the show is the chance to watch our favorite TV and/or movie personalities look ridiculous. Don’t believe me well first hear how the celebrities were roped into this. Every week two contestants are randomly selected to participate in a game show unlike any other. In order to win twenty-five grand they have to sit on a coach with three celebrities as part of their team. These celebrities along with the everyday folk will actually be playing various different games in the hopes of winning overall. However the celebrities won’t be seen in their usual glamorous attire. Instead they have to pull off silly (and that’s to keep it mice) in order to win their team leaders the cash. So its entertainment wrapped up in altruism.

And this week the two lucky contestants with money on the line are Taylor and Leslie. They’ll be joined by Nate Berkus, Adam Devine, Tony Hale, Arsenio Hall, Malin Akerman and Bradley Whitford as they strive to win Hollywood Game Night.

The first round was probably the funniest. No one had expected a film quiz and because they were just starting out – it quickly became a game of which team can shout out an answer first. Even if it was absolutely the wrong one. Nate Berkus funnily enough gain a name for himself during this round when he was unable to damper down his own excitement.

But it was Round Two that had these stars at their worst. Both Taylor and Leslie were given sound deafening headphones. So while they couldn’t hear the music – it was up to their teammates to help them guess which song they were trying to reenact. And just for the record “Wrecking Ball” is much harder to display when there is in fact no wrecking ball to swing on.

Team Taylor was able to gain ground during the second and then fatally lost it after that. Her team lost during the third round when they were supposed to be quick to the buzzer. And though Nate was practically willing to injure himself in order to get to the buzzer first – it only worked the first time!

All of them were jokesters to begin with and as the game progressed the audience finally got to see them at their most competitive!

As for Block of Fame which should have been by far the easiest round, Team Taylor lost out yet again to Team Leslie. Block of Fame consisted of arranging large blocks into the celebrity their host, Jane Lynch, was describing. Team Taylor got stumped by Neil Patrick Harris and so two rounds back to back went to Team Leslie. And their guys that have Adam Devine. Adam was one of the few that refused to stop making jokes.

If Team Taylor doesn’t make a comeback in the next round then there won’t even be a need for them to start thinking about the bonus round Jane keeps promising.

Off the Top of My Head was again riddled with laughs, but this time the stars were all in seeing as it would be the final round for many. The teams have to guess what the card on their heads said and sadly for Team Leslie, they were unable to complete this round due to the fact they didn’t know they could pass until it was too late.

While Team Taylor was able to use their full time to their best advantage. They tied with Leslie for this round though as it turns out they still couldn’t pass to go on to the bonus round. Which left Leslie in the awkward position of having to pick a celebrity (from either team) to play the final game with her. She went with Malin Akerman. Malin by far has been her biggest asset so of course Leslie was going to go with her.

Then one of the funniest things occurred during the bonus round – Malin started to crack under pressure. She started strong and then kept having to pass because her mind would freeze. All she had to do was describe celebrities. It was supposed to help Leslie correctly identify them and like it was mentioned earlier – it started off fine. That is till Malin was at a loss for people like Ron Howard and Billy Joel. I don’t know about Malin but for other people key words like “Bltyhe Howard’s father” or “Uptown Girl” could have done the trick.

So Leslie didn’t get as many names as she would have liked (you know to increase her winnings), but at least she walked away having won this game of Hollywood Game Night!