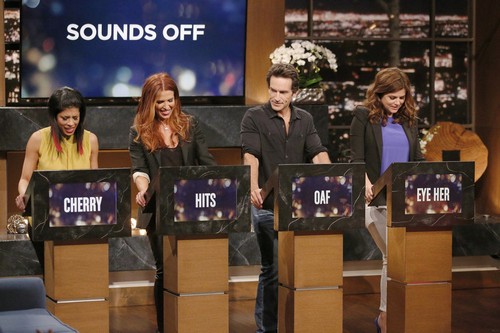 On last week’s episode two contestants lead a team of three celebrities, which included Jenna Fischer, Darren Criss, Jason Biggs, Laura Prepon, Natasha Lyonne and Mario Lopez. The winner of this episode was Mario Lopez, Jenna Fischer, Darren Criss, and their Team Leader Chris Young.  Did you watch last week’s episode?  If you missed it we have a full and detailed recap, right here for you.

On tonight’s episode two contestants will lead a team of three celebrities, which include Tim Gunn, Tiffani Thiessen, Jeff Probst, Leslie Bibb, Poppy Montgomery and David Alan Grier, in hopes of winning the $25,000 grand prize. A series of unique party games will bring out the best, funniest and most competitive sides of some of Hollywood’s most beloved stars in this hilarious no-holds-bar competition hosted by Jane Lynch.

On tonight’s episode of Hollywood Game Night, another two teams compete to win thousands for themselves and for their respective charities. On Team Bridget there’s Tiffani Thiessen, Poppy Montgomery, and Jeff Probs. On Team Natalie there is Tim Gunn, Leslie Bibb, and David Alan Grier. However this star studded cast is surprisingly the weak links on these otherwise strong teams. It’s their “normal” counterparts that are getting all the answers right while it’s the stars tripping over themselves. As you can most certainly witness in the first game.

“Celebrity Fusion” is when two stars sharing at least one name are visually merged together in the ultimate guessing game. And, sadly, these people that might have actually worked with some of these stars are completely stumped in guessing their names correctly. Or another frequent occurrence is that the person at the podium won’t know the name even as their team members are practically shouting the answers behind them. Sorry to use a throwback remake, but please remember it is a Thursday night – what’s up with that?

Team Natalie is off to a great start in the lead at the end of the first round – can they keep up their momentum?
The answer is most definitely yes, they can. The second game “Sounds Off” was when each team member had to read part of a tongue twister and correctly guess the name of the movie. And just like in the first game, Natalie’s team was on fire. They only missed one of the tongue twisters and seeing as Team Bridgette was unable to guess all of theirs as well – Team Natalie maintained their lead.

Natalie is a serious competitor and she’s on a team with other people taking this game serious. Leslie is super hyper and David is dead set on defeating the other team. Plus she has Tim Gun who undeniably does gets it wrong more than he should, but when the rare right answer comes to him it ends up saving his team.

So funnily it comes down to just him and Natalie to protect their team’s alpha status during “Smash that Buzzer”. Whoever ran to the buzzer first and with the correct answer got two points and the chance to eliminate someone off of the other team. And half of Natalie’s team managed to eliminate themselves by saying the wrong answer. Yet Natalie, who was eventually left by herself, still came out in the lead once again due to her own tenacity.

Thus far Natalie appears unstoppable. She won three straight games and the fourth wasn’t any different. “Link In the Chain” is again guessing the word based off clues the team captain gives them except this time they have to repeat all the correct answers in chronological order. Team Bridget was finally able to shine during this round! They all worked together and the got the clues instantly.

But Team Natalie was just as good. Only this time they kept nearly running out of time because David seems to be suffering from old age. He would forget the things he heard literally two seconds before.

Team Natalie was dominating and frankly, by that stage why even bother to do a fifth game? Though they did do a fifth game and predictable it went in Natalie’s favor. “Show Me the Music” could have only worked for Team Bridget if Bridget actually knew music. She was supposed to guess the song her team members were trying to act out and failed horribly. So Team Natalie went to the bonus round and she chose Leslie to join her.

Leslie and Natalie complimented each other so well that they got all ten answers right with time to spare. So Natalie gets her 25,000 dollar prize and Leslie gets 10 grand to donate to an orphanage she’s been working with for the last fifteen years.

A happy ending for everyone this time!