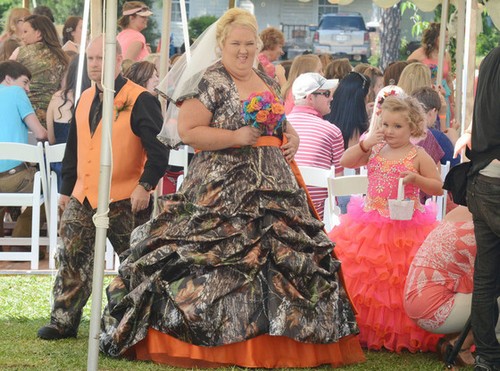 Mama June released a statement to US Weekly revealing that just sixteen months after their wedding, she and Sugar Bear Thomson have split up and gone their separate ways. Mama June’s statement reads, “Sugar Bear and I have decided to take some time apart to figure out some things in our relationship. We are taking things day by day, but regardless of what happens, the girls will always be our number one priority. We want to thank y’all for your support.”

While Mama June’s public statement seems to imply that their split was amicable, multiple sites are reporting that is not the case at all. According to TMZ, Sugar Bear was caught red-handed by June on the infamous dating site Plenty of Fish, where he was trying to reel in some ladies by writing in his profile that he was single and “loved to cuddle,” (on top of several other cliché redneck activities).

While June and Sugar Bear have been together for several years and share the raising of four children together (including Honey Boo Boo, the only child the had together), they actually just tied the knot last year in a comittment ceremony. An ongoing storyline on Here Comes Honey Boo Boo is the lack of intimacy between June and Sugar Bear, and he has tried every trick in the book to jumpstart June’s sex drive and convince her to start sleeping with him again. It looks like Sugar Bear got tired of buying candles and taking Mama June to couple’s therapy and decided to go online and find what he wasn’t getting at home, and it has come back to bite him.