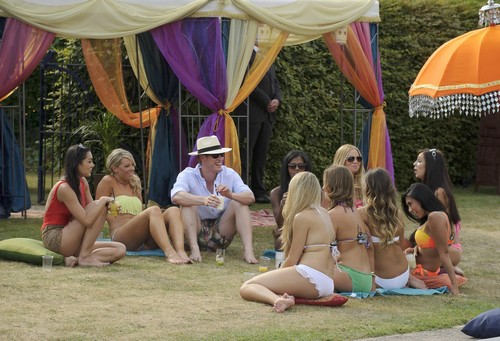 I WANNA MARRY HARRY returns on FOX tonight with its new episode called, “Spotted by the ‘Paparazzi’.” On this evening’s episode, Sir (Matt) and Kimberly go on a hot-air-balloon ride over the English countryside to a picture-perfect secluded picnic area, where they are interrupted by stalking paparazzi. Later, back at the estate, there’s a pool party and the ladies make a splash with their favorite dance moves.

On last week’s episode Rose enjoyed the first one-on-one date and they took a helicopter ride to a secluded beach. Later, “Sir” challenged the ladies to a game of cricket and they had a chance to show off their athletic abilities. “Sir” told Andrea he felt like he hadn’t gotten to know her and he’s sorry but he has to ask her to leave. He hugs Andrea and she goes.  Did you watch last week’s episode?  If you missed it we have a full and detailed recap, right here for your enjoyment.

On tonight’s episode “Sir” takes Kimberly on an incredible hot air balloon ride over England and on a secluded picnic, but their date is disrupted by some pesky paparazzi who follow them. Later, back at the estate, the ladies are treated to a pool party fit for a royal and the girls show “Sir” their best American dance moves

Each week “Sir” handpicks one lucky gal to take on an extravagant adventure, while another’s dream of “happily ever after” is dashed, when she is asked to leave the estate. As “Sir” narrows down his choice to one woman, he will finally have to admit the truth about his royal masquerade. What will happen when Harry admits to the deception? Crown or no crown, Harry plans to see which girls are in it for real and which are only in it for riches.

You’re not going to want to miss tonight’s cool new episode of I WANNA MARRY HARRY which begins at 9PM EST on FOX. We’ll also be live blogging it for you right here. While you’re waiting for the show to start hit up our comments section and tell us your thoughts on the contestants!

Matt dives in and checks on her. She comes up and she’s smiling. Matt says this is a girl who will go to extreme lengths to impress him and isn’t sure if that’s good or bad. She thinks it’s storybook that he jumped in after her. He gives the girls hugs and heads off but thinks Kelley will have a headache in the morning. Jackie says she can’t wait to rub it in the other girls’ faces later.

Back at the house, they tell the other girls what happened. Maggie says he said that his brother just settled down and had a baby. Karina thinks it’s Prince Harry. Meghan is upset because she hasn’t had any time one on one with him and says she needs to step it up especially if it’s Prince Harry. Next morning, Kingsley calls out to the ladies and says Sir has arranged a pool party.

The girls are excited. Meghan hopes she can catch his eye at the party. They head out to the pool where there is a cool set up. There’s even a DJ there. Maggie is thrilled about the full bar and heads right over. The others are drinking too and then he comes down dressed just like Prince Harry was on his infamous Vegas trip. He walks in and thinks they are normally out of his league, so he thinks he’s in heaven.

He thinks this is the chance the girls will show their true colors. He sets up a limbo bar. The girls and Matt do the limbo. Rose is impressed with how flexible he is. Meghan’s boobs won’t fit under the bar, Rose cheats but some of the girls are good. Matt says he’s looking for a genuine connection so he wants to take one or two to the hot tub away from the crowd. He wonders how to choose.

He asks Meghan to come with him to the hot tub and she tells the others not to miss them too much. Jackie says she’s not so shocked that Meghan and her giant boobs got his attention. Meghan sidles up close to him and asks if he lives alone. She says if he can’t answer, it’s okay. He says he lives with others and likes to let his hair down. He tells her she has a naughty smile and Meghan thinks there is a lot of sexual tension. He asks if he can kiss her and he does. He says she’s a good kisser. He had fun.

Meghan comes back and tells the others she got a smooch and it wasn’t just a peck but no tongue. She gets very graphic describing it. The DJ starts turning and they tell Carley to go mix something. He says he hasn’t seen much of her personality or see her let loose. She goes over to the tables and she plays some dance music. The girls start dancing. Matt thinks she’s quiet and reserved but it was fun.

Matt dances with the girls and Maggie says it’s f-ing crazy that she’s dancing with Prince Harry. Chelsea gives a lesson on twerking. He had never heard the term before and thinks Chelsea is always fun and flirty. Then Rose tries it. She says it’s beyond her dreams that she would be twerking with the Prince of Wales. Meghan tries it. Kinglsey says it’s jolly good and shouldn’t be legal.

One girl won’t do it because she says her niece may be watching. Kelley is constantly watching him and he thinks she’s fallen for him or Prince Harry. She says she’s getting jealous of all the other girls showing him attention.

Matt has time for one last one on one and sends Kingsley to bring Karina to the hot tub. She’s thrilled. Matt thinks she’s beautiful, exotic and fascinating. She says she dated a UK soccer player before that always had photos taken and says it wasn’t about who he was. Karina says she had a famous boyfriend that ended because he wasn’t ready to settle down. She tells Matt she likes him for him and says he’s sweet and charming. He gives her a kiss on the cheek.

Matt says this whole thing has been fantastic and he’s starting to form emotional attachments to some of the girls. Maggie is drunk and talking elimination night. Meghan says he wouldn’t kiss her and send her home. Maggie says it’s annoying she got a kiss. Meghan says Maggie is losing it and goes from fun to sloppy really fast. She isn’t sure the royal family would approve of someone getting piss-ass wasted every night.

Kelley says she’s okay with it because he obviously liked her. Maggie is dying to kiss him because she says she’s developing feelings for him. At dinner the girls talk more about who he is – one says he can be the Pauly D of Europe. They wonder if there’s a chance he could be one of Camilla’s kids. Maggie has no clue that Prince Charles remarried. Rose says they may not know all of the UK royals and the intricacies.

Kingsley sits with Matt who says Chelsea is beautiful and a character. He tells him he kissed Meghan but not Karina. He says he didn’t get a kiss me vibe off Karina. He says Carley is probably the prettiest girl there but still isn’t sure what her angle is. Matt says he really likes Kelley but says he’s not sure if she’s his type. Kinglsey asks who will go to the Crown Suite and who will go home.

Kingsley comes in and the girls say uh-oh. He says Sir has deliberated and wants to speak to two of them. He calls Carley and Karina. They go with the butler. The other girls wonder who will go home. They think Karina is more fun but Carley is more private and mysterious and smart.

Maggie has her head in her hands and says it’s nerve wracking. She says it’s always a surprise. She really likes him and tells the other she’s starting to get jealous. Chelsea says Maggie drinks all the time and then gets emotional. Maggie says she never yelled at Meghan at the pool – but we saw that she did.

Karina meets him in the library and Carley outside. Matt says it took a while to get a chat with her and wasn’t sure about her feelings. He says the same to Carley pretty much. He says he doesn’t feel like he knows her that well and she says it’s hard in a large group setting. Matt tells Karina that he has enjoyed their chats but isn’t sure about her vibe for him. He says he has to make a decision.

Matt tells Karina it’s been a really tough decision and tells Carley the same. He asks Carley to leave the estate. He says she’s sorry and she tells him not to apologize and says it’s been a great experience. Matt says although she’s smart and beautiful, didn’t give him much. She’s not sure what he was looking for and says she’s not materialistic.

He tells Karina if she wants to move into the Crown Suite and she smiles and says he’s tricky. She says he scared her and he kisses her on the cheek and she kisses him back. She heads up and Kim runs to hug her. She’s so happy for her. Karina is happy that she’ll be the next to get a date with the Prince. The girls laugh because Maggie has passed out again.

The other girls mock her drunken craziness. Karina comes in and they all cheer for her. Kelley says Karina is glowing and she’s upset because she wants a date with him. Meghan thinks that Karina is serious competition because she’s princess material. Chelsea thinks she needs to step up her game.