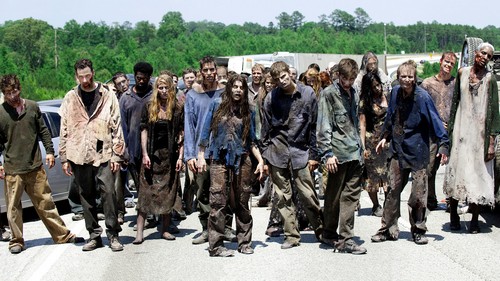 The Walking Dead is back on AMC tonight with all its gory goodness and a new special episode called, “Walker University.” This special episode will give us a behind-the-scenes look at the making of our favorite walkers on the show.

Last week, The Walking Dead aired a special for fans to see a documentary exploring the making of the acclaimed horror drama, featuring behind-the-scenes look at makeup and special effects. Did you watch Inside The Walking Dead Special last week? If you missed it we have a full and detailed recap, right here for you.

On tonight’s special episode we will be getting a more in depth look at the walkers from the show, it’ll be a behind the scenes documentary talking about their movement and how they created them for the show.

This is a special episode of the fifth season of The Walking Dead so you aren’t going to want to miss any of the unfolding action. We’ll be recapping “Walker University” live right here for you. In the meantime, hit up the comments and tell us what you’re most excited for in season 5.

Atlanta, GA: Zombie school begins. Greg Nicotero says that this whole thing started because they wanted to perfect the ways in which the zombies performed. He also says that a very cool thing about the zombies on Walking Dead is that none of them are digitally altered or enhanced. They’re created with practical makeup techniques.

Apparently, the show will be introducing more elements to the walkers, making them more deadly and dangerous than ever before.

Norman Reedus says that Greg Nicotero is so good at what he does, that what he does allows fans to literally see the deadness behind the monsters, which are actually real people. He teaches the actors how to walk, how to act, how to embody the true nature of an undead being.

Greg says they’ve had five seasons to showcase the amazing artwork that the creature lab has created and perfected. From an artistic standpoint, it’s extremely satisfying. He says that the show has really come into its own aesthetic and, not only that, but has worked to shape the perception of the zombie in popular culture — ultimately, they’ve worked to change and shape the zombie/horror genre.

Russell, the stunt coordinator, says that they’re always looking for walkers they can “recycle” and reuse in future episodes.

We see some clips of students perfecting their zombie walk. Greg says the walk is “tremendously, tremendously important.” Greg says that he never demonstrates how he wants a zombie walk to appear — but he knows what he doesn’t want to see: Frankenstein arms.

Over the past five years, the show has amassed a library of nearly 100 reusable makeups.

Greg says, even though the walkers are slow, it’s paramount that they ALWAYS feel threatening.

The students play a game called “Kill the Cameraman.”

Greg says what’s really important for him as a director is how well the students take — and receive — his direction.

A young kid named Eric will be featured as a Hero Walker (a zombie extra that has more screen time than others). First, he gets his clothes from the costume designer. Next, he heads to makeup where he’s fitted with his hella gross prosthetics. Eric is completely transformed and prepares for his big zombie debut!

Norman Reedus says that, in some ways, he thinks the zombie extras’ acting jobs are harder than theirs.

Gale Anne Hurd, an executive producer, says that the walkers are what makes this show and, truly, without them there’d be no show to celebrate.