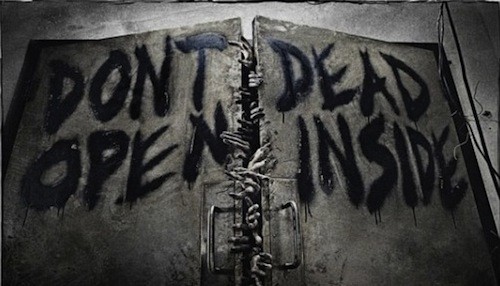 Did you watch the Talking Dead special this week where Chris Hardwick hosted Talking Bad.  His special guests were executive producer Scott M. Gimple and actress Aisha Tyler will join host Chris Hardwick to discuss the upcoming season of The Walking Dead.  If you missed it we have a full and detailed recap, right here for you.

On tonight’s special fans will get to see a documentary exploring the making of the acclaimed horror drama, featuring behind-the-scenes looks at makeup and special effects.

This is a special episode of the fifth season of The Walking Dead so you aren’t going to want to miss any of the unfolding action. We’ll be recapping “Inside The Walking Dead” live right here for you. In the meantime, hit up the comments and tell us what you’re most excited for in season 5.

RECAP: We are taking a look at the props and place where the zombies are created, Norman the sculpter is working on the puppet; they use the skeletal and muscle structure to create the walkers; they use this to make it look right. The people are focusing on the realism in the anatomy, Norman says that everyone is on their A game at all times working on these walkers.The most challenging walker was the one in the well, they found is incredibly hard to make it so ugly and digusting. Every season they work hard to refine the heads they use to crush and try to make them more fruit like that it’s easy to crush.

Norman says the wardrobe department is so important for the evolution of the characters and creating the walkers, they use many techniques to give the clothes ruined and tattered looks; to give it that realistic look.

Andrew Lincoln mentions that it was just crazy when he went into Atlant and saw the set; how the street was completely reserved for the show and it look so realistic. We now see the the lake where the Governor drowned people; they have a lot of land for shooting shots in the woods. We are now taking a look at the prisons location and see how the set was designed; it wasn’t real at all but the crew made it feel like it.

At the end of the second season it was really cold out and they were trying to light the barn on fire; it was almost impossible to film. We now see the shoot out in the last season when Rick’s group is running away in Terminus and how they did the bullets using little pellets to make sparks as they hit.

Steven Yun says he loves visual effects because they always take care of you, making sure that nobody gets hurt while doing the stunts like cutting off limbs, hitting people with weapons and such. They use digital weapons mostly to then be able to create the amazing effects of the zombies being sliced up. Norman says that with the crossbow he pulls a bolt out, loads it off screen so that when he brings it up there’s nothing but a digital one to shoot at the walkers.

We now see that a lot of the things in the backgrounds at time are visual effect shot; that we would never know. They love doing little details like having the walkers head sliced off and hit off a car or a piece of it just comes apart, feeling like those little details really define the kills.

We now move on to the stunts, we see the burning zombie stunt where we saw them chasing Lizzie and her sister Mika; they had four stunt guys as the walkers and it’s hard to brace the falls for walkers. Since they don’t have any awareness so they just drop and can get hurt. Many of the cast members do their own stunts, they love doing all that they can; Norman is amazed at how many walkers he has to kill sometimes and loves doing the stunt work.

The one stunt they did was smashing the walkers teeth on a rock, it’s difficult because of having the teeth get smashed; some people had trouble actually watching it happen. Even though it wasn’t real, it looked so painful.

Now we see the cast members and their importance, we see the speech made for Scott leaving the cast since Hershel died in season 5; they gave him a big nice send off. They did it for every cast member, Andrew had a hard time saying goodbye to John who played Shane since he was a brother to him.

Norman says when he saw zombie Merle he felt so sad and it’s said that he shed real tears; the cast loved Michael Rooker who played Merle. Norman wishes he had more time on the show.

Norman says he would set his trailer on fire if they killed him off on the show.

We now see fans saying how much they love The Walking Dead, though a lot of the crew could not even believe how popular the show has become; they are so greatful for the fans and love the show is being given.