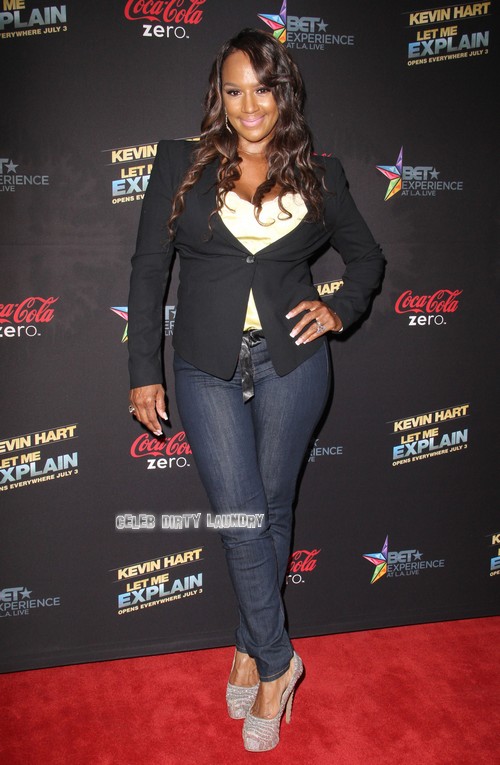 It is a good thing that cats have nine lives, especially if they are the feline companions of any pregnant fan of the popular Basketball Wives LA television program. BBWLA star Jackie Christie recently shared her beliefs about what mothers and expecting mothers should do with their pet cats, and it ain’t too pretty either. In fact it is pretty crazy.

A TMZ photog caught up with Christie and her friend Sundy Carter doing some shopping in Marina Del Rey, CA the other day and inquired if both the ladies were mothers, which they both are. Upon learning that the reality stars were mothers, the TMZ photog solicited some advice from the ladies regarding an issue that his pregnant friend was having with a “very very jealous kitty cat.” The photog explains that the cat will not allow anyone to get near the pregnant friend and that as a result she is nervous about what will happen when her child is born.

Christie’s friend stated simply to get rid of the cat; however, Christie’s response was a little more detailed than that. First Christie says to “sell the cat.” Then Christie went and dropped some knowledge to the TMZ photog on cats saying, “Cats are known to suck the air and the soul out of babies. That’s like a myth but its true.” She then went on to state that in certain countries cats aren’t allowed near babies because of this little soul sucking problem they have.

Christie even goes on to explain the cat soul sucking phenomena in detail to the photog, who then protests that the cat is like a “best friend” of the pregnant woman who has had it for six years. Christie was not persuaded by this argument because she feels children are more important. So she then tells the photog to “choke the cat, kill the cat… get the cat the f*ck out.”

Oh, did I mention this was all caught on video? Yeah, it is pretty funny after the blank stare falls from your face. That Christie chick is crazy and hilarious. Although she makes one valid point, that children should be more important to parents than their pet cats, the rest just sounds downright insane. I’m sure once cat lovers pick up on this story there will be a change.org petition circulating the internet. Hopefully that TMZ photog didn’t relay this advice and that little kitty is still safe. What do you think about the video and Christie’s shocking cat revelations? Wash out this light load with your thoughts in the comments below.  What will PETA say?