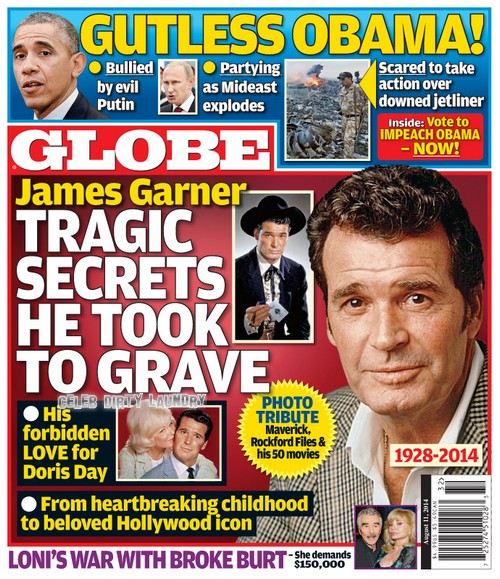 Yesterday it was revealed that the official cause of James Garner’s death on July 19th was a massive heart attack. While the 86-year old’s death wasn’t completely a shock it still left decades’ worth of his fans to grieve. Sources say that the beloved actor had suffered from coronary artery disease for quite a while and hadn’t been in the best of health before his death. Garner was loved for his popular roles in television shows like The Rockford Files as well as for his film career that began back in 1956.

Garner gained a new generation of fans with his appearance in The Notebook and the decision to return to television on 8 Simple Rules. An enormous number of tributes have poured in through social media from industry insiders, fellow actors and fans alike all bonding over the work of this Hollywood legend. We all know that being an icon means that there are always some secrets in the closet and according to the Aug. 11th print edition of GLOBE Magazine, Garner did indeed have those.

Garner reportedly carried a torch for fellow actress Doris Day for decades. Actually getting together and having a real romance that could be out in the open was forbidden and it was a sadness that he took to the grave with him. GLOBE also gives readers’ an in depth look at Garner’s crushing childhood and how he rose above the pain to become such a beloved fixture in Hollywood.

Loni Anderson and Burt Reynolds have always had a tumultuous relationship and in spite of being long-divorced and their son now being adult, the battle continues. According to the Aug. 11th print edition of GLOBE Magazine Loni is now attempting to get $150,000 out of her ex. All of the details plus other fascinating stories are in the latest issue so you’ll want to grab yourself a copy ASAP. In the meantime, what James Garner role is most memorable for you? GLOBE nails down the hottest news each week so that readers are assured a wonderful and informative experience. I’ll be enjoying my copy as soon as I finish work today!