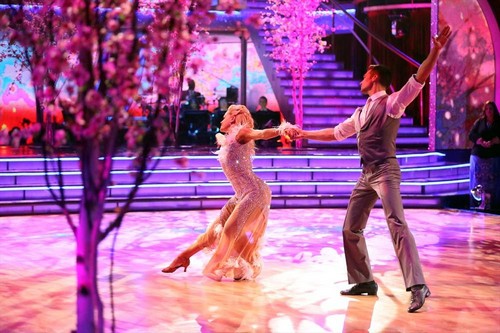 Singer and actor James Maslow danced a Cha Cha Cha, on tonight’s season 18 episode 9 of Dancing with the Stars with Peta Murgatroyd for their DWTS semi-final performance.  Emmy Award winning director and choreographer Kenny Ortega makes his “Dancing With The Stars” debut as a guest judge on American Icons Night when he sits alongside Len Goodman, Bruno Tonioli and Carrie Ann Inaba  If you missed tonight’s show you can read a full and detailed recap, right here.

On last episode James performed a Viennese Waltz and Carrie-Ann loved it saying, :  “James you are a special soul when you dance.  I agree with Len on your posture.  On top of that Peta’s foot came off the floor.” They scored Amy 36/40.

James Maslow and professional dancer Peta Murgatroyd: dancing a Viennese Waltz dance. James has been getting ready for his dance tonight.  James tweeted, “So cool of @LA_Reid to stop by rehearsal and give me some advice. What an amazing dude.”

Judges comments:  Carrie Ann: “James we have seen Michael Jackson 100 times what you did tonight was spectacular you gave us MJ James Maslow style. It was fantastic.”  Len: “It was fantastic. Some Michael Jackson and enough Cha Cha.  It was a terrific number, well done.”  Kenny: “Good job my man, you put your heart and soul in that and it was electrifying.”  Bruno:  “You were on fire.  All in all, a criminal of a cha cha cha.”