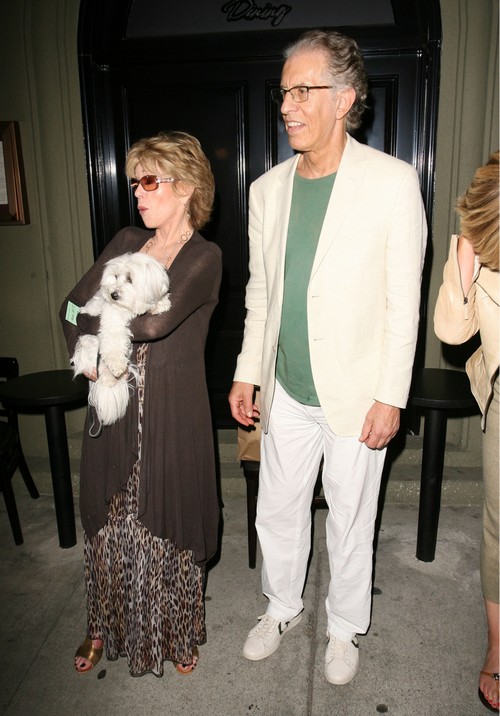 Jane Fonda has had three marriages and three divorces in her life, so it’s obvious why she’s taking her latest relationship slow – or at least, slow by her standards. Jane and record producer Richard Perry have been together for the past five years, and there’s never been any peep of marriage trouble between them.

However, Jane recently revealed that they almost ended up breaking up before they became serious – all because Richard wouldn’t take his Parkinson’s Disease seriously. Jane reveals that she gave Richard an ultimatum – either take care of his health or she was saying sayonara.

Jane explained on her blog, “I told him, ‘Richard, if you don’t take your disease seriously and become an expert in it so you know what your options are, I’m not hanging around.'”

She also adds that during their first date, she didn’t even think about their health because she just didn’t see their relationship lasting. Obviously, that changed fairly quickly. She explains, “It’s a funny thing about Richard – he tends to laugh when confronted with challenges. He also said he would lick the Parkinson’s. I said to myself, ‘No he won’t. There won’t be a cure in his lifetime.’ But I didn’t pay it much heed. After all, it was just a date.”

As they ended up getting more committed to each other, Jane started educating herself about the disease and started helping Richard get back on track regarding his health. And although Jane admits that Richard still struggles with the disease sometimes, he’s actually the stronger one in their relationship.

You know, Jane Fonda is 76 years old. If she and Richard are still together and going strong after five years, I would wager that this is her last and most impactful relationship. But then again, there’s also a chance that they’ll get divorced within the next two years – it wouldn’t be unheard of in Hollywood couples, especially not with someone who’s been divorced three times already. But maybe fourth time’s the charm?