BY Sean O'Brien on May 8, 2014 | Comments: one comment
Related : Jane Fonda, Russell Crowe 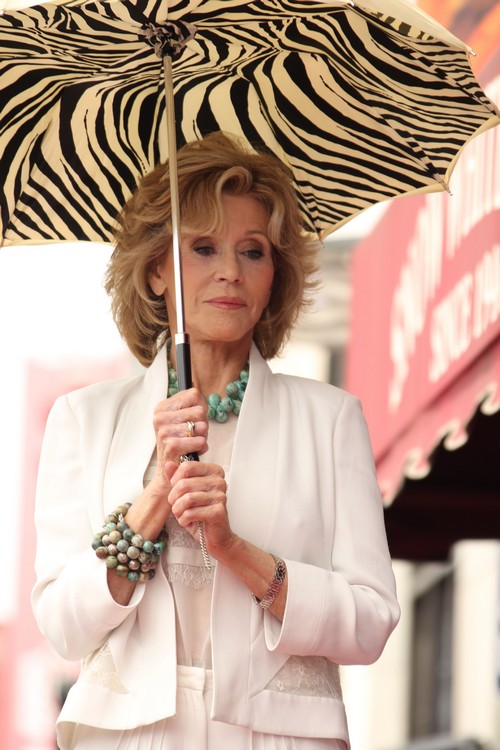 Can you imagine 76-year-old Jane Fonda and 50-year-old Russell Crowe entering into a relationship? A 25 year age difference is a big deal, but we often see it in Hollywood.

But we’re getting ahead of ourselves. According to reports, Jane has become obsessed with Russell after filming Fathers & Daughters together, and she’s been flirting with him and texting him non-stop for the last few months.

A source tells the National Enquirer, “Jane is gaga over Russell. When she wrapped up her scenes, she got his phone number and email address. She’s been sending him flirty messages and suggesting they get together once their schedules allow.”

However, Jane has a boyfriend, Richard Perry, and he’s obviously not too happy about Jane’s flirtations with Russell. Although most people would probably view it as pretty harmless, Jane’s significant other is clearly threatened by it, even though there’s little chance of Russell reciprocating Jane’s actions.

Jane’s been with Richard [who’s 71 years old] since 2009, and she recently opened up about his long battle with Parkinson’s disease. But maybe the pressure of taking care of him is starting to take a toll on her? The source adds, “After dealing with Richard’s health woes, hanging with a guy as virile as Russell must have been a fun distraction for her.”

Apparently, Jane has convinced Richard that she and Russell are just friends, but on the side, she’s telling her friends that Russell’s the perfect man and that she would do anything to get together with him.

Do you guys believe this story? Jane has had many, many relationships in the past, but it truly seemed like and Richard were going to stay together for good. But if they’re not happy together, then wouldn’t Jane be better off breaking up with him first, before trying to flirt with actors who are decades younger than her?

Jane Fonda helps Sally Field celebrate being awarded a Star on The Hollywood Walk of Fame on May 5, 2014 in Hollywood