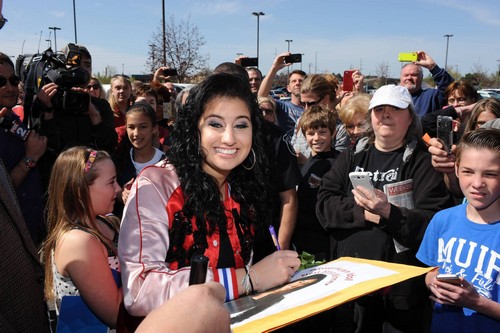 Jena Irene sang, “Titanium” by David Guetta Featuring Sia this week for her Judges’ Picks or Randy Jackson’s Picks song choice.  This week each of the three finalists sang three songs for the performance show – one selected by their hometowns, the Judges, and Randy.

Did you see Jena’s other song picks? If you missed either of them we have the videos, right here. The Top 3 will really have to bring their A game tonight to stay around for another week, we expect a higher level of performances as the contestant pool diminishes as we head towards finale next week.  Did you watch tonight’s performance show? Just in case you missed tonight’s show we have you covered and you can read our full and detailed recap here!

On last week’s episode Jena sang “My Body” by Young Giant. and Jennifer had this to say about her rendition saying, Jena you sounded really good as you always do.  What I like that is coming together is kind of your signatures, it’s classic and something that’s coming together.  You evne have a signature phrase, “C’mon Let’s Go.”  I see it coming together, it’s exciting to watch.”