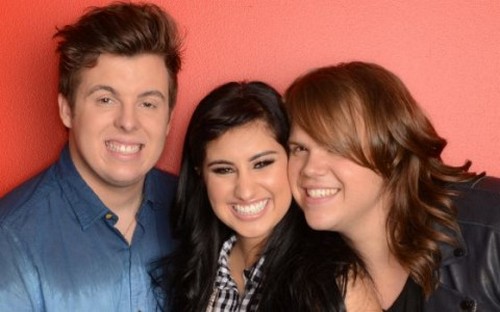 It’s another exciting night for AMERICAN IDOL on FOX. Season 13 is really heating up and we very close to finding out who will be the next Idol. On tonight’s episode The Top 3 finalists (Alex Preston, Caleb Johnson and Jena Irene) travel to their hometowns to visit friends and family. Later, they each perform three songs: one selected by the judges, one picked by Randy Jackson and one chosen by fans from their hometowns.

On last week’s performance the Top Four finalists took the stage in hopes of impressing the judges and winning America’s vote! On last week’s episode “Love: Breakups and Make-Ups” evening, we celebrated the agony and the ecstasy of music’s greatest themes.  Each of the finalists chose two songs to perform from the many thousands of requests tweeted to them over the past few weeks. On the results show, Jessica Meuse was eliminated.  Did you watch last week’s episode?  If you missed it we have a full and detailed recap, right here for you.

On tonight’s episode With the Grand Finale one week away, the Top Three finalists take the stage in hopes of impressing the judges and winning America’s vote! Tune in to see who amazes the judges and who falls flat in the all-new “3 Finalists Perform” milestone 500th episode of AMERICAN IDOL XIII,

Judges Comments: Keith – “Great job.  I gotta say firstly Randy great call on that song, it’s a great song period.  You got this blues soul thing in your voice, it’s a fusion of blues, rock and roll, soul, it’s all in there.  It’s a really good job tonight Caleb, I could hear the voice in certain spots but you worked through it.”  Jennifer – “you know I know you wanted to do so much more with that song and we know you could have.  You should be very happy, pace yourself, you have no problems up there.  It was a still a stellar performance.”  Harry – “I have to compliment Randy, it was really an interesting choice for you.  My real concern I have caleb is you don’t hurt yourself tonight and you have all of that in the right place and you don’t hurt yourself.  Anyway, nice job.”

Judges Comments: Jennifer – “Alex! I see you Alex, and I see what you’re doing Alex.  We’ve been telling you to create moments and make it different, and when you picked up and did percussion you had me and then you went over to the crowd.  It was a different Alex.  It was a great performance.”  Harry – “Again, great credit to Randy for picking the song again because it gave you everything that you needed.  I would say that I could see the wheels turning which is something I wouldn’t have wanted to see.  You should do the song on the road and when you get comfortable going back and forth it’ll be better.  Good job.”  Keith – “I agree with Harry, you had so much going on and you were trying to remember so many thing you gotta go from the guitar, to the drum, to the mic, to the guitar, I get it!  But when you went to the drums and sang, that’s when you’re at the best and you’re in the zone, I saw some really great stuff in there.  Good call on the song choice Randy.”

Judges Comments: Harry – “Another great song choice from Randy, songs aren’t all about high notes but this song every one wants to hear that high note.  Unfortunately that’s like nothing to you, it’s so in your alley.  The song was strong and you killed all those important notes.  You sang it live and you did a great job.”  Keith – “Jena, what I love about the way you perform is you have such a great balance between being a stealth singer and you can really perform.  You know how to mix the fun with the conviction, really great job tonight.”  Jennifer – “Listen, you hit all the high notes and that was awesome.  This is one of the most difficult songs to sing, I think.  In the beginning to me it felt a little shaky.  It just felt a little stiff.  Maybe it was the high notes.  You have to unclip yourself and you have to walk down, it is what it is.  You have two more songs to sing and I know the one we picked for you, you are going to murder.  I’m not worried about you.”

Judges Comments: Keith – “Gosh, if you close your eyes you really wouldn’t know about your voice, and you’re doing such an awesome job working through it.  What it does to your confidence level, it’s really scary.  You killed that song.  It’s the first time I noticed a Steve Perry tone in your voice.”  Jennifer – “It’s what Keith said it’s really scary, your voice will come back though.  When you’re a performer though you gotta learn to rely on other things.  You started singing the emotion of the song and the lyrics of the song and you hit them effortlessly, and that’s all you have to do tonight.  Don’t concentrate on how you could have sung it, think about how you can sing it from your soul.”  Harry – “You’ve come so far in this competition and I realize I don’t really know what you would do when this competition is over.  Just real quick, what would you do?” Caleb – “I really wanna do my own record, classic rock, some old school, all originals.”

Judges Comments: Jennifer – “I knew that you would sing the heck out of that song.  Oh my God, it was beautiful and it was all yours.  We forgot about Rihanna, it was yours.  Nice job.”  Harry – “It was beautiful, it was really really strong.  We only get to see you sing one song at a time, and I’m wondering what it would be like in a concert?”  Alex – “Well I played when we did Hometowns, like 6 minute jams.  My concerts would be fun.”  Keith – “you know what’s great is you’re taking artistic choices and owning a song.  Which for me you just owned a song.  That’s what I’m saying, those are the things, the audience responded, Jenn got the gooseys.  I loved it Alex.”

Judges Comments: Harry – “Keep my critique short, you know what’s so great about what you do is even where there is no room you find a way to make it your own.  Listen here’s my question, if there were no cameras around what would you do on stage?”  Jena – “Yea, I’d be all over the place and connecting with the audience and stuff like that.”  Keith – “It was great, you’re always so bullet with your pitch and range, and the notes keep going.  Gosh, from infinity hour and all the way here on Idol.  Excellent.”  Jennifer – “That’s what I’m talking about from your last performance to this performance, you did awesome great job.  That’s my Jena.”

Judges Comments: Keith – “If ever there was like a complete moment of miraculous healing that would have been it.  I just wanna throw stuff, let’s throw stuff.  Awesome!.”  Jennifer – “I’m not a thrower but if I was a thrower I would throw.  That was a true Idol moment.  Ridiculous!”  Harry – “This song is all about opportunities and advantages and I like seeing you take full advantage.  Awesome job.”

Judges Comments: Jennifer – “You know this is so hard, it’s so hard.  America really has their work cut out for them.  I see three people that want to be in the finale so bad.  They have a tough choice tonight.”  Harry – “You know your home town is really rooting for you because I don’t know a soul that doesn’t love that song.  You sang it in the To Ten when you were just a wee lad, it’s another classis Alex performance.  Nice job.”  Keith – “Look, for me personally I think it was really hard to come out after your version of “Stay” so that was kinda coming down a little from that performance.  But, the fact that you nailed that once I think your average is really strong tonight.”

Judges Comments: Harry – “There’s so many different ways that you take the stage, you sang with a mic earlier and then you sat behind the piano.  We heard you sang this song before and it was brilliant, and this time it was even better than before.  For the voters at home I really don’t envy the job you have at home.  That was terrific.”  Keith – “The only thing I disagree with is at the end you said “I don’t belong here” and you SO belong here.  The way you have gravitated towards the band, the way you perform, the way you sing, everything has grown with leaps and bounds.”  Jennifer – “It was brilliant.  You’re such a baby, you’re only 17 and it’s so easy for you. I feel like you’re going to be so hard to beat.”