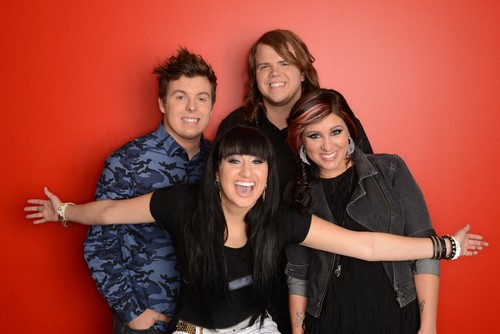 On last week’s performance show the top 5 finalists took the stage in hopes of impressing the judges and winning America’s vote. The Top 5 — Jena Irene, Caleb Johnson, Jessica Meuse, Alex Preston and Sam Woolf had to tackle a country and rock and roll song. On the results show we said goodbye to Sam Woolf. Did you watch last week’s episode? We did and we recapped it right here for you.

On tonight’s episode the Top Four finalists take the stage in hopes of impressing the judges and winning America’s vote! Tune in to see who amazes the judges and who falls flat in the all-new “4Finalists Perform”. In tonight’s “Love: Breakups and Make-Ups” evening, we celebrate the agony and the ecstasy of music’s greatest theme.  Each of the finalists will choose two songs to perform from the many thousands of requests tweeted to them over the past few weeks.

Caleb Johnson is singing “You Give Love A Bad Name” by Bon Jovi. [VIDEO HERE]

Judges Comments: Keith – “Killer man, what a great way to kick it off.  I love that song, you know it’s tricky sometimes.  When you have a song that’s so well known, what else can you do with it?  What I really loved was at the end when you made it a Caleb thing.” Jennifer – “I agree I always feel like I’m at a rock concert, I know why they start the show off with you.  The bottom line is Caleb is ready for prime time.”  Harry – “Here’s a little food for thought, when you came out here you sang the same lick that you sang when you auditioned.  Maybe think about some different adlibs you can do.   Great way to start the show.”

Jessica Meuse is singing “Since You’ve Been Gone” by Kelly Clarkson.  [VIDEO HERE]
Judges Comments: Jennifer – “That’s one of my favorite tunes by Kelly Clarkson, and it’s not an easy song to sing.  I don’t feel like it was the best song for you, it didn’t compliment your vocal ability, and it was low at times.  I have to say I did feel you in it, and that was one good thing.”  Harry – “Hey Jess, I’m going to be perfectly frank with you as I always am.  I’m glad you have two more performances, because that wasn’t your best.  There’s a different between heightened performance and what is going on in your brain.  You have to do something to show us more, we can’t see inside your head.  Experiment to try to get it even more, push it, show us how you feel.”  Keith – “I think some of that comes from confidence, halfway through the song I was thinking I wonder if it is really hard to be rocking out with three of us sitting here staring at you like this.  So, I start rocking out because I really feel for you.  You gotta pull out all the stops and that’s what I wanna see you do.”

Judges Comments: Harry – “Alex, they really like you.  I think one of the reasons they like you is the reason I like you- you spend so much time deconstructing these songs and reassembling them in your own way.  You took that tune down to the bare bones and built it up in your style.  I dig that bro.”  Keith – “I liked that too, occasionally I feel like I miss a bit of weight in your performances, the one little piece of the puzzle that I love to hear is a command in the phrasing.  If you pull that back a little bit and put command in your phrasing, that to me would be more compelling.  That would really get to me.”  Jennifer– “You’re so unique and that’s why I love you.  My only concern is you gotta be thinking about am I creating a moment that is going to help me win the competition.  I’m concerned about how you’re going to win.  How are you going to top a Caleb or a Jena?  I want you to think about that when you’re planning your songs.”

Judges Comments: Keith – “At this stage there’s no question about your vaocal abilities, you have an amazing amazing voice.  The only thing I felt in that performances was it wasn’t a full, committed, energetic performance.  I felt like the moves weren’t born from the music.”  Jennifer- “I’m going to go with the audience with this one.  I felt like it was a controlled and a very commanding performance for me.  I actually really loved it.  You’re coming more and more into your own and you’re becoming more confident, and you’re only 17.  I can’t wait to see you grow.”  Keith – “Hey Jena, yeah I think vocally it was a 10 out of 10.  It’s almost like the feeling, whatever you’re feeling would drive you to do what you do.  Did you wanna do something else during that song during the bum bum bum beat?  I got the sense that there was a restriction.  Take the shoes off, jump around, ditch the heels.”

Judges Comments: Jennifer – “Caleb what can we say? What can I say? It’s so in your wheelhouse, it’s so who you are. You killed it again. You’re going to be tough to beat.” Harry – “I was thinking when you were singing that tune, what if that was your traveling band? You’re a lucky guy, nice performance!” Caleb – “I have to say I don’t think it is any performance, that the stage lit up when the band started playing. It was cool. Excellent!”

Jessica Meuse is singing “So What” by Pink. [VIDEO HERE]

Judges Comments: Harry – “Jess, I felt like I was in Benny Hana and they put the flame in. Listen really carefully, I think you are terrific and you have an incredible voice and an amazing talent. Those two songs you sang tonight were not the best songs for you, and I am really pulling for your third song.” Keith – “I totally agree with you, a song that doesn’t suit you and has no reflection on your talent.” Jennifer – “I’m going to have to agree with them, as much as I was rocking with you and had fun with you…it wasn’t right for you.”

Judges Comments: Keith – “So, here’s the thing. You know what I liked about that was that you changed the melody for the chorus. It allowed you to have all the other parts for the song. I thought it was really really good.” Jennifer – “You’re a force to be reckoned with in this competition, you really give Caleb a run for his money. You guys go toe to toe in bringing down the house. Right at the end you did kinda come out of the song before the song was over. Stay committed, and you really could take it.” Harry – “Nice job, really strong. I’m curious about on the chorus, why didn’t you go high? Interesting choice, nice job. Good job Jena!”

Judges Comments: Jennifer – “Alex, they love you and I love you. And I love watching you do what you do. Again I worry about you in this competition, it has stayed kinda linear to me. I feel like you need to do something and surprise us in some way.” Harry – “I’m always asked to define the technique, except for the major 2 chord you played a minor 4 chord. We have become so used ot you deconstructing these songs, and it sounded just like when Jason did it. That’s your strength and I think you should stick to it.” Keith – “you guys gotta learn four songs for this show and I am taking all this into account. My feeling was at the last 8 bars of the song you knew you were almost to the end of the field and scoring a touchdown, and that’s when you really started to deliberate and that’s the part of you I like.”

Judges Comments: Harry – “I don’t have to say a whole lot, but it was real nice ot hear you sing softly. That was absolutely phenomenal.” Keith – “I’m actually clapping for Harry’s critique, I agree with him. My wife is probably at home freaking out because that is one of her favorite songs. Hallelujah!” Jennifer – “You know we’ve been pushing you to step outta your comfort zone and sing something softer. Tonight I can honestly say you singing that was your best performance since the beginning.”

Jessica Meuse is singing “You And I” by Lady Gaga. [VIDEO HERE]

Judges Comments: Keith – “That was the perfect song for you, it really is, vocally, melodically, the break down section especially. That’s you, I heard you. Killer.” Jennifer – “I agree it was perfect for you, that’s what we have been waiting for the whole night. I’m glad you picked that song.” Harry – “You got some pretty strong critiques from us throughout the night. But what did the girl from Slapout do? She came out swinging with a song that was perfectly suited for you.”

Jena Irene is singing “Can’t Help Falling In Love With You” by Elvis. [VIDEO HERE]

Judges Comments: Jennifer – “I have to kiss you. Elvis Presley did this song, and he’s the King, and you reinvented it. It’s crazy. Look at me I’m shaking, I’m so glad I was here to witness that, it was beautiful.” Harry – “That took such immense courage for you to perform that song in that way, I think it’s rare for the American public to see something like that-what you just did. Simply put, it was incredible.” Keith – “You take all of these unique elments and you put them together in your own way, you’re your own species. You’re a platypus baby. And, that was spellbinding, absolutely spellbinding.”

Judges Comments: Harry – “You really needed that, I think people are going to remember your last song tonight, and I’m so happy that was your last. There have been some great performances tonight and that was one of them” Keith – “I agree, the thing you’ve got that is really specific to you is a poetic vulnerability. That song was perfectly suited to you.” Jennifer – “I won’t add too much to it, that was a perfect song tonight and you sang it beautifully. You really needed it. You were integral tonight.”