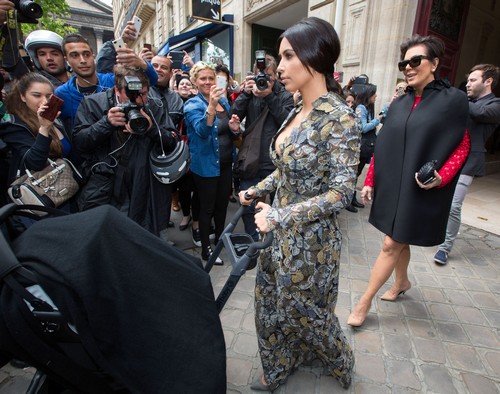 Somehow, Kim Kardashian has managed to wrangle herself Jennifer Aniston‘s hairstylist, Chris McMillan, for her wedding. How do you imagine Jennifer feels about that? Here she is, a legitimate A-list actress who worked hard for her success and fame – and by extension, her team of stylists – and Kim freaking Kardashian is getting to share her hairstylist.

This is the same hairstylist that shot Jennifer’s hair into pop culture history with ‘The Rachel’, i.e. Jennifer’s iconic bob from Friends. It’s hard to imagine that he’s going from styling some of the biggest celebrities in Tinseltown to styling Kim Kardashian’s hair, but I suppose that says way more about Kim’s current place in Hollywood than it does about his career options. For some reason, Kim has suddenly become someone that people aren’t embarrassed to be associated with anymore. We can trace the beginning of this trend back to Anna Wintour, who seems to have legitimized Kim by putting her on the cover of Vogue Magazine.

However, this isn’t coming completely out of left field, especially since Chris and Kim have worked together in the past. He styled Kim for the MTV Movie awards in 2013, and he even helped her out on the set of a photoshoot as far back as 2012. But knowing the nature of Chris’ clients, I don’t think any of them – and particularly Jennifer Aniston – will be happy to know that they are sharing their hairstylist with Kim. You can’t blame Chris for taking the gig – Kim’s wedding will unfortunately be splashed on the cover of every tabloid and every news outlet for days after it happens, and Kim’s hair will be scrutinized down to the last detail. This mean that his name will be bandied about by everyone discussing her wedding, and he’ll get invaluable publicity from that. Sure, his other clients won’t be happy, but the nature of the industry’s changed, and he’s just taking advantage of that.

Reality star Kim Kardashian and her fiance Kanye West leave their residency on May 23, 2014 in Paris, France. The pair are heading to the Wideville Castle for their pre-wedding party and rehearsal schlepping Kris Jenner along with them.