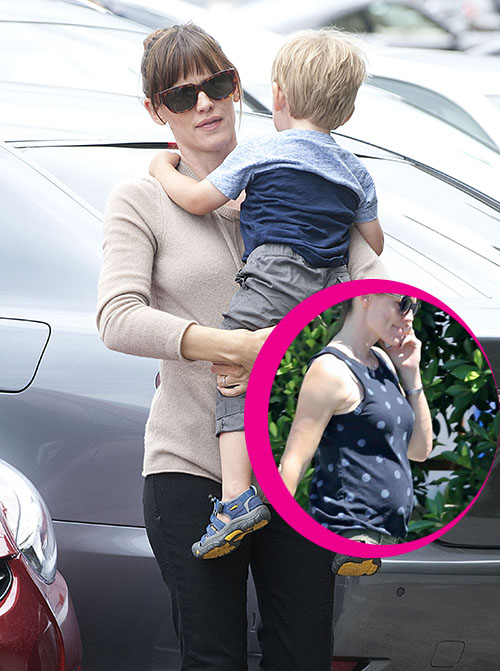 According to rumors and gossip, Jennifer Garner and Ben Affleck‘s romantic life is a total mess (some might call it a disaster), but that’s not stopping the golden couple from having a fourth baby together! Pregnancy rumors have further been fueled after Jen was photographed walking through LA with what appears to be a rather bumpy stomach — a baby bumpy stomach!

Now, as many of you know, Ben is starring in the upcoming Batman v. Superman: Dawn of Justice movie and, therefore, is incredibly busy. But that doesn’t mean he wants to put expanding his family on hold. As we reported yesterday, according to the Aug. 11th print edition of OK! Magazine, Jen has seemed overwhelmed with their 3 kids (probably because her life is wrapped around them) but has mentioned that Ben wants more.

This would be Jennifer and Ben’s fourth child. It’s clear that they make good parents and care about their children, but if they can’t get their alleged marriage troubles under control, then how in the world will they create a family dynamic ideal for raising a houseful of children? What do you think about Jennifer Garner’s baby bump? Do you think she’s actually pregnant with a fourth child? Leave your thoughts in the comments section below!

Chances are we’re going to be getting a new Affleck/Garner baby before we get the new Batman movie, which is scheduled for a 2016 release. Yikes! So far away!

Jennifer Garner stops by the Brentwood Country Mart on August 3, 2014 in Brentwood, California. Is Jennifer sporting a baby bump? Rumors have been circulating that Jennifer and husband Ben Affleck are expecting their fourth child.