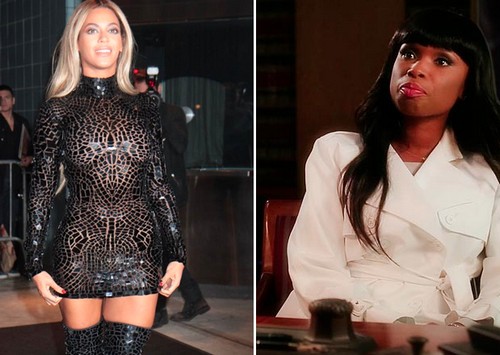 With the 2014 Grammy’s mere hours away Jennifer Hudson decided to use her dynamic voice to shade Beyonce in a new interview. When the Huffington Post asked Jennifer what she thought was overrated she was only too eager to respond, “Girl, I can’t. Ooooh … Singing about the same old things in music is so overrated. Sex, drinkin’, the club. Okay, especially sex. Like, we [are] grownups, we ain’t got over that, like, really? Ain’t you too old for that kind of thing? Can you talk about something else? I get annoyed with those things. But I can’t answer the last question, ohhh though I want to.”

Of course people jumped to the conclusion that Jennifer was talking about Beyonce since certain songs on Bey’s new album are of the explicit sexual nature. The songs Partition and Drunk in Love specifically are geared toward the young and dopamine infused crowd rather than the grown and classy crowd. Jennifer Hudson has never been good at using her words, so her meaning probably got lost in the delivery, just because she is less than articulate doesn’t mean she’s wrong. Recently, even the great Patti Labelle alluded to the same thing when she said that she doesn’t consider herself a diva because the title is thrown around so carelessly and given to those undeserving. That could also be considered shade since Beyonce is really the only relevant singer out now.

Jennifer isn’t fooling anyone, we all know who she is referring to and I’m glad she had the guts to speak up, even if she could have benefited from some hooked on phonics before she responded. I think what Jennifer meant was that the manner in which sex is approached these days is downright crude. I listened to both songs on Beyonce’s new album and both times I walked away feeling like I knew too much about her amorous activities… and I’m no prude. At one point I got a visual of Jay-Z and it wasn’t pretty. Immediately I needed a drink; it was either that or take a hot poker to whatever cerebral hemisphere is responsible for short term memory.

All of the legends that Beyonce likes to align herself with talked about sex in their music but it was tastefully presented. Patti Labelle was as dirty as they come but she was smart and enlightened enough to do it in French. Singers compete and give each other backhanded compliments, and no one should get in a uproar about this, except of course Beyonce’s over zealous fans whom I am convinced all got rabies from the same dog bite. How about a little history lesson, even Beyonce felt threatened before and shaded another artist, Jennifer Hudson to be exact. Back during the Dreamgirls era when Jennifer was getting all of the attention, queen (with a little q) Beyonce felt the need to remind everyone in an interview that had 9 Grammys and didn’t have to prove herself. Now that was enough shade to take on a picnic.

It’s obvious that Jennifer isn’t kneeling before the alter of the queen and her camel, and that’s pretty refreshing. Too many folks love that woman’s soiled leotards and its creepy. She should be careful though the beehive is like the mafia, talking smack about their queen is a good way to turn up missing. Invest in extra security Jennifer, and sleep with one eye open