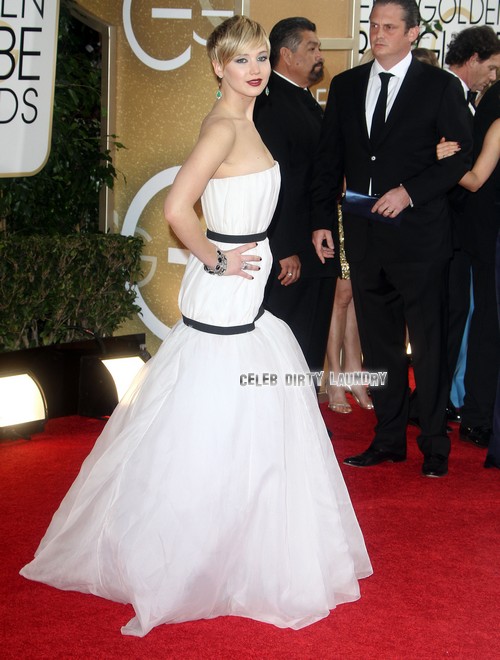 The tabloids have been trying to create Jennifer Lawrence drama ever since her popularity sky-rocketed after her Oscar win, but to no avail. However, Star Magazine is refusing to give up, and their latest bit of fan fiction features Jennifer Lawrence caught in a love triangle between Bradley Cooper and real-life boyfriend Nicholas Hoult.

Apparently, the situation started at the Golden Globe Awards, where Jennifer took Nicholas as her official date. However, Star claims that it later devolved into fights when Nick felt that Jennifer didn’t pay him enough attention. A supposed ‘source’ tells Star, “Jen and Nick got into a huge fight because she gave all her attention to Bradley — he felt like an outcast. He was clearly annoyed.”

Nicholas Hoult felt like an outcast, in a place where he’s worked with almost half the people around the table? Also, there were many photos and videos released from the behind-the-scenes at the Golden Globes, and Nick looked like he was having a blast. He and Jennifer couldn’t take their eyes off each other, and Nick was the one she kissed when American Hustle won Best Picture. Also, Nicholas was also spotted hanging out and laughing away with Amy Adams and her husband, and it’s clear he had a jovial relationship with everyone at that table. So much for being an outcast, huh?

Now, when your girlfriend ends up working with a former People’s Sexiest Man Alive for three movies back-to-back, most guys might be a little worried. But when you look at the fact that Jennifer and Nick finally made their awards-season debut at the Golden Globes, I don’t think Bradley Cooper is really on the forefront of their relationship.