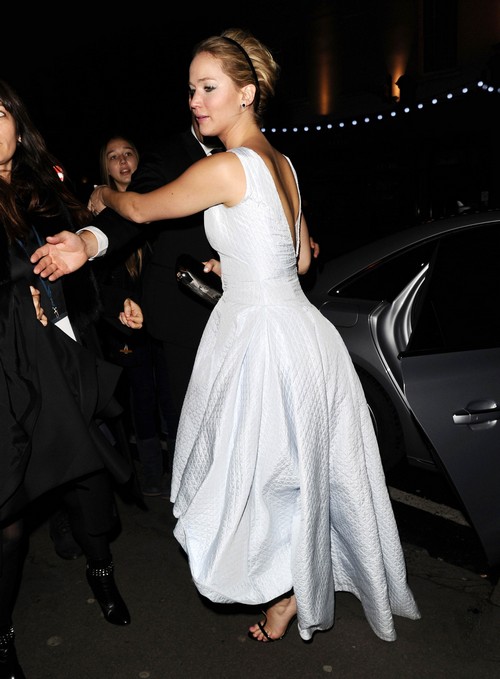 It’s been a bad month for Jennifer Lawrence, starting with her nude photo leak and culminating in a wardrobe malfunction [wardrobe malfunction pictures here] at last night’s Mockingjay premiere. It’s unfortunate that even though her professional career continues to soar with stellar reviews and great box office prospects, her personal image keeps taking hit after hit. It’s sexist and it’s a double standard, but it’s still there.

Instead of talking about the movie or about how well it was received or how great Jennifer’s performance was, the media has once again taken to focusing on Jennifer’s nip slip. Unfortunately, this barely-there wardrobe malfunction has made headlines, especially since it comes weeks after her nude photo leak. And to be fair, it wasn’t the premiere where the purported nip slip happened, but rather the afterparty. Jennifer wore a fairly demure dress to the actual premiere, but sexed it up a bit for the afterparty, wearing a low-cut cleavage-bearing dress. Although the wardrobe malfunction wasn’t actually that scandalous [a.k.a. you can’t really see anything], the media has already started jumping on the bandwagon.

From the pictures, it’s clear that Jennifer Lawrence realized that her dress might cause a wardrobe malfunction, since she’s actually holding her chest in at several points. But you know, with the amount of cameras and attention focused on her, it’s a miracle that the photographers didn’t get more.