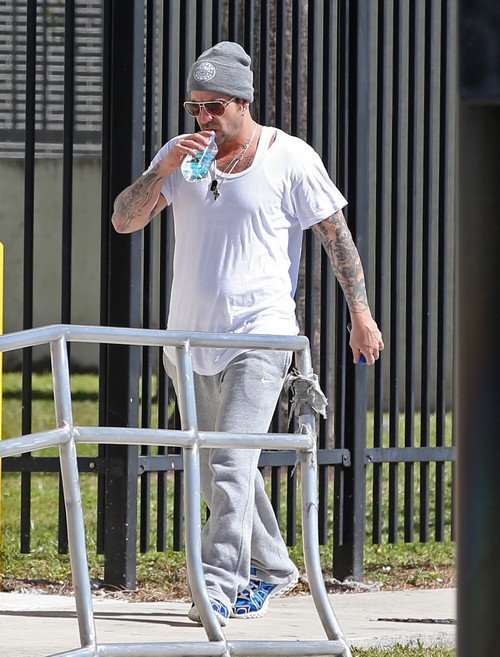 Earlier today, papa Bieber took to Twitter once again to defend Justin. “I can protect my kids, but I can’t protect them from you and your lies. Believe in the truth not in the lies of the enemy. #reallife.“

It’s great to see Jeremy trying to defend and protect his son. But we can’t forget he also had a helping hand in Justin’s arrest. Jeremy was reportedly partying with Justin in Miami all night before his arrest. He was seen in SET nightclub partying with the 19-year-old superstar and his entourage. After his arrest, Justin admitted to being under the influence of prescription drugs, alcohol, and weed. Jeremy obviously saw his son getting wasted and did nothing to stop it or keep him out of trouble. Sources even state that Jeremy helped block off the street that Justin and the singer Kahlil was drag racing on.

Although Justin was booked, given an orange jumpsuit, and appeared in front of a judge, he was not behind bars for long. He was released on a $2,500 bail just hours after to being arrested. So how did he celebrate his freedom? Did he go home and hide from paparazzi and cameras? Of course not. Jeremy and Justin headed straight to South Beach for more drinks. A local reporter caught the two gathered around a table with several bottles. Like father, like son.

Jeremy isn’t the only one trying to support the pop star. Justin’s manager and friend, Scooter Braun tweeted: “@justinbieber love you and i will act in the manner of someone who truly cares. that is all I have to say. thanks for all those concerned.” He ended the day tweeting, “Been a long day. Bottom line is we are defined by how we handle adversity. Be there when it counts. Love fully in good times and bad.”

Lady Gaga asked her fans to show a little sympathy on her website. “Hey monsters. I know everyone today is taking about Justin’s arrest and all sorts of words and judgments are happening on the Internet. Everyone is entitled to their own opinion, and to stand up for themselves, but I think we should be supportive of Beliebers.”

Lady Gaga may be genuine in her sentiments because she knows what it’s like to be constantly in the public eye. But are Jeremy Bieber and Scooter Braun really acting in Justin’s best interest? Justin seems to be constantly surrounded by “yes” people who lets him do whatever and get away with whatever. We rarely see Jeremy with Justin and now all of sudden he’s “protecting” his child and Justin’s mom seems to have all but removed herself from the situation.

I’m not one of the people advocating for Justin to go to jail or be deported to Canada, but their needs to some consequences for his actions. Over the past few years, he has gradually shifted from a sweet, innocent teenager singing “baby, baby” to a bad boy wannabe. It’s not working and Jeremy needs to stop living the celebrity lifestyle through his son and get him the help and structure he clearly needs.

What are your thoughts on Jeremy Bieber? Is he a partying too much with Justin or is he a great father? Join the conversation and leave a comment.