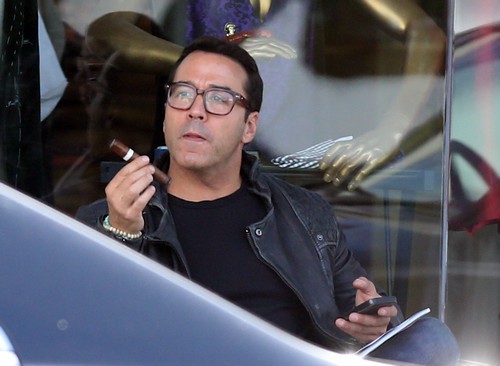 According to TMZ, Jeremy Piven‘s secret girlfriend was just arrested for attacking her husband. What? Yes, this is actually as crazy as it sounds.

So Jeremy Piven was apparently dating this hot Australian model, 31-year-old Sophie Turner. However, Sophie’s apparently married AND has a daughter. When her husband, Gianmichele Gennari, found out about her ‘relationship’ with Jeremy, he reportedly confronted her about it, which led to her attacking him and then consequently getting arrested for the attack.

She was arrested on March 23rd for a felony charge on domestic violence, even though it’s not fully clear what was involved in her ‘attack’.

Now, Gianmichele’s side of the story is that he confronted Sophie last month about her ‘sexually provocative choices‘, a.k.a. her choosing to hook up with Jeremy after abandoning him and their daughter at a hotel in Santa Monica in February. I’m not sure why it took him one month to bring this up, but there you go.

Gianmichele adds that during their physical altercation, Sophie caused cuts and scratches all over his face and arms, plus she ripped his shirt off his body. Yikes.

Now, I’m sure Jeremy Piven knew that his on-again/off-again paramour had a husband. Jeremy and Sophie have been spotted together as early as 2010, and there’s no way they’ve been hooking up for three years without Jeremy knowing about her relationship status. It’s not like Jeremy cares about all that, as he’s too busy flirting and sleeping around Los Angeles.

It’s also quite obvious that Sophie’s husband has been harboring complaints about her ‘sexually provocative’ behavior for a while now, but he probably got sick and tired of it and finally decided to confront Sophie. Unfortunately, that didn’t work out so well for him.