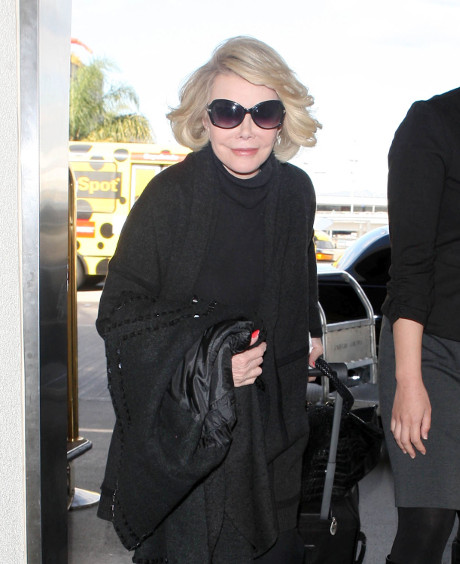 Apparently size or age doesn’t deter Joan Rivers from completely blasting a human being with her cruel words. The Mean Lady recently stooped to a new low by bashing Kim Kardashian and Kanye West‘s 7-month-year-old child, North West, by calling her “ugly” and in “desperate need of waxing.” While the commentary is mean and surprising, it’s relatively tempered for Joan. Her recent statements prove what we’ve known to be true for a long time now: she really doesn’t give a crap about what people think of her or the words she releases into the universe.

Her jab managed to score some laughs (as her commentaries usually do) at her most recent stand-up show. Rivers mentioned that the Kardashians, including Kim and Nori, stopped by the E! offices recently. That’s when the Fashion Police host fully experienced the awesome glory of North West. “That baby is ugly… I’ve never seen a six-month-old so desperately in need of a waxing,” she said.

Oh, Joan. Will you ever say a nice thing? Probably not. That’s just not your style, is it? Speaking of waxing, Kim Kardashian was actually accused of doing just that to her young baby and, in response to the backlash, Kim K tweeted, “Do people really think I would wax my daughters eyebrows so young? Come on, I’d wait until she’s at least 2 1/2!”

Funny, Kim. Seems like there’s a new queen of comedy to watch out for! What do you think about Joan’s recent jab at North West, just a defenseless, innocent baby child? Leave your thoughts in the comments section below.