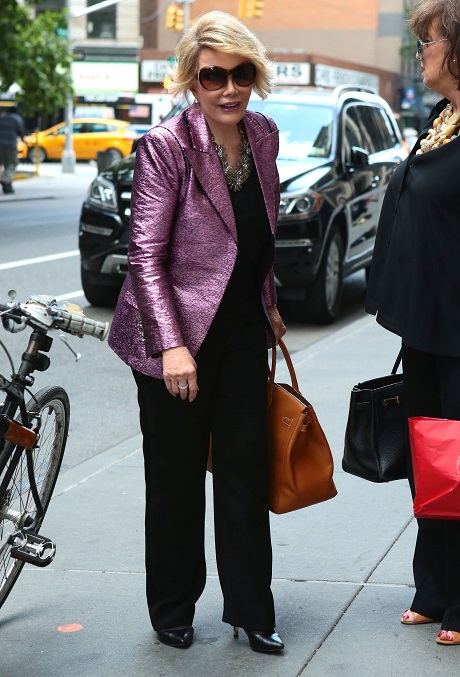 Bat-mad Rivers’ new book, Diary of a Mad Diva, is creating an apocalyptic celebrity tsunami. Rivers makes it abundantly clear that she hates everyone, except Kelly “Oh-Joan!” Osbourne, naughty Satan, and fur.

The black hole in Rivers’ soul is always hungry. The furry death bib’s sole purpose is to prevent Tyra Banks’ tears from reaching the event horizon. Black holes hate teardrops, because it makes them angry and sad. We all know what happens when a black hole loses its cool… Hint: Kris Jenner.

Surreal satire aside, there is no denying the fact that a fur cloak is an audacious example of animal cruelty. This despicable “fashion statement” has received widespread condemnation from animal rights activists, celebrities, politicians, and world figures. One of its biggest critics is PETA (People for the Ethical Treatment of Animals), a polarizing animal rights organization that throws red paint – and hate-eyes – at celebrities. Rivers and her black hole experienced PETA’s wrath on Tuesday.

She was promoting her book at Barnes and Noble when one of PETA’s people asked her why she insisted on wearing fur. She replied, “You’re absolutely right. I’m totally on your side.” Then Rivers went nuclear. An inaudible negative comment was met with: “Oh shut up! You don’t know what the f**k you’re talking about!” She went into a tirade about the old furs in her cellar and indirectly stated that she isn’t interested in buying new furs – don’t judge an utter bitch by its furry cover. She also told the audience that she “works really hard [for] poor rescued animals.”

Nice save, Rivers. Nice save.

Joan Rivers — Screw You, Peta … My Furs are Older than Me!
– Watch More
Celebrity Videos
or
Subscribe