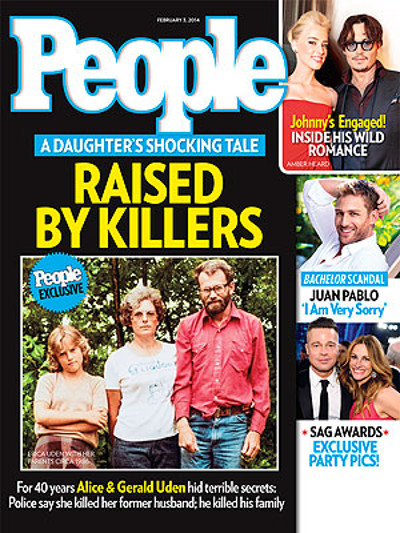 The cover of this week’s People features a disturbing story of a child raised by murderers. Erica Hayes, the youngest child of Gerald and Alice Uden, both recently arrested in separate murder charges, tells about the shock she felt when she learned of the secrets her stepfather and mother kept all those years. Gerald Uden, now 71, is charged with murdering his ex-wife, Virginia Uden, and his two adopted sons, Richard and Reagan Uden. The boys were only 11 and 10 years old at the time.

While many suspected for years that Gerald had committed the murders, Alice Uden’s arrest was a bit more shocking to her daughter. Alice is charged with murdering her former husband, Ronald Holtz. According to People, Alice dumped Ronald’s body in a mine shaft. In the interview, Erica says her mother told her that she killed Ronald Holtz because he was abusive.

People also covers Johnny Depp‘s “wild romance” with Amber Heard. As we all know, Depp was in a serious relationship with Vanessa Paradis for more than 14 years, during which they produced two children, Lily Rose, 14, and Jack, 11. Amber, who is bisexual, was in a relationship with a female photographer, Tasya Van Ree, when she and Johnny met on the set of 2011’s The Rum Diary.

Other feature stories include an apology from The Bachelor‘s Juan Pablo for his comments regarding the possibility of a future season of The Bachelor featuring a gay or bisexual man. In an interview with TV Page, Juan Pablo said that while he respected the gay community, he didn’t think it would be a good example for kids who watch the show (Why would kids, let alone some grown individuals, want to watch that show anyway?). In the feature, Juan Pablo claims that his words were taken out context (even though the original interview source released the audio tape in full, providing plenty of context, in our opinion).

People also shares exclusive photos from behind the scenes at last weekend’s SAG Awards parties. Photos include a shot of Jennifer Lawrence having a laugh with Harvey Weinstein and Julia Roberts snuggling up to Morgan Freeman.