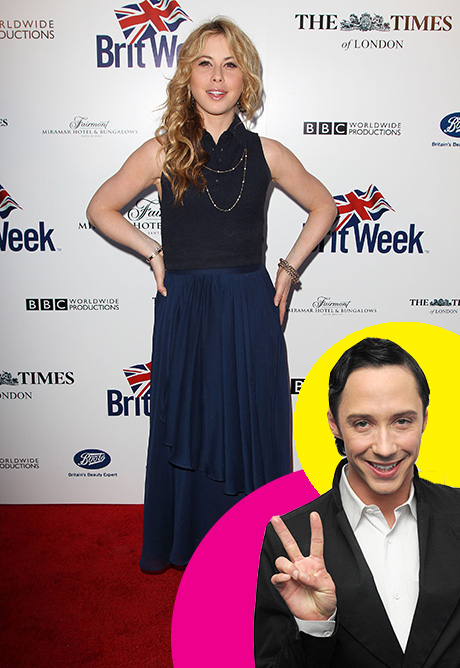 If you tuned in for the Sochi Olympics back in February, then you are already familiar with Johnny Weir and Tara Lipinski. Both are champion figure skaters in their own right and they teamed up together to provide daytime commentary for the figure skating portion of those winter games. While on paper it seemed like a good pairing, I don’t think anyone really expected these two to become stars of the games themselves. Johnny is currently my favorite skating commentator because not only does he get the technical side of things but he is also extremely articulate and his “Johnnyisms” have inspired blogs and Twitter accounts of their own.

NBC has been smart in realizing that Johnny and Tara’s chemistry just works and that they should utilize it any chance they get. Luckily, both are obsessed with fashion and adore horses so NBC hired them as part of their Kentucky Derby coverage that will take place this weekend. It’s a move that makes a lot of sense and, after being part of a press call that took place on Tuesday with both Johnny and Tara, I’m not sure who is more excited about this new gig!

“I’m very excited to go because I’ve never been to the Kentucky Derby. Even now I’m having a fitting and sitting in a sea of hats. It’s one of those once in a lifetime things and I’m honored to be able to attend and work with my close friends,” said Lipinski.

Johnny on the other hand isn’t a novice when it comes to Derby Day. “This will be my second time at the Kentucky Derby. I went back in 2010 after the Vancouver Olympics but this time I’m going as a broadcaster and that is so exciting. I have roots in the horse culture of America and I have roots in Equestrian sports, so I’m just infatuated with horses. It’s a huge honor to go and be able to report back to America on the culture and atmosphere of the event. To share what it’s like to be young and hip like me and Tara while attending this elegant affair.”

So how is their fashion coverage actually going to go down on Saturday? “What we’ll be doing will be a pre-taped cultural look inside of the Kentucky Derby. That way we can also hang out and enjoy the race. We’ll then be available after the race to film the follow up things and also to be a part of the finale of the show,” said Weir.

Tara also is intrigued by the culture and history of the day itself. “The race is the most important part of the day but nowadays there is so much more that goes into these events and this particular day as far as entertainment is concerned. The race is a few minutes but so many people come and put so much thought into what they’re going to wear. The fashion is so unique for this event that it’s a lot of fun to see what everyone shows up in.”

What is it that makes The Kentucky Derby such a phenomenon? Weir seems to have given that question a lot of thought: “There are so few sporting events that are cultural events that people rally around the television to watch. The Kentucky Derby is one of them that has this whole side show to the big race. There is drinking and partying and fashion that goes into it. There’s a very rich southern charm that comes through with this. You don’t necessarily think of Kentucky and fashion in the same sentence so this is their shining moment for fashion.”

In the Last three months, Johnny and Tara seem to have really embraced working together, but is their friendship and connection as good as it appears to be on camera? “We’re definitely not sick of each other,” said Lipinski “We had such a great bonding moment in Sochi and we’ve known each other for a very long time. The skating world is very small and we have so much fun working together and it has been a really wild ride.

“The fact that we are able to work together and to do things together that we love in the entertainment world is so special, especially since we come from a very small, cut throat, and backstabby kind of sport,” added Johnny who really does seem to adore his new sidekick. “It’s hard to make real friends in our regular genre and it’s amazing to find someone that is on your same wave length. As for the two of us, we are just having fun. We take every truly beautiful opportunity that we get and we run with it because we really do love being together and sharing our own special sparkle with the world. I personally will never tire of my little blonde munchkin.”

No interview with these two fashionistas would’ve been complete without asking the obvious question: What will they wear on Derby Day? Tara admitted that she was seated in a sea of hats and bright colored dresses trying to figure it all out but Johnny, well, he has a clear plan. “I’ve been working with Karen Rosegold and she and I have been brainstorming about my hat because I want a custom one because I’m me. We decided that the theme of my hat for Derby day is a Pegasus.

While Derby Day is technically about the race, I can’t help but think that many are going to tune in just to catch a glimpse of Johnny’s Pegasus, don’t you agree?

The Kentucky Derby’s coverage begins at noon on Saturday on NBC.