Jonah Hill Apologizes For Homophobic Slur To Paparazzo – Should He Be Forgiven? (POLL) 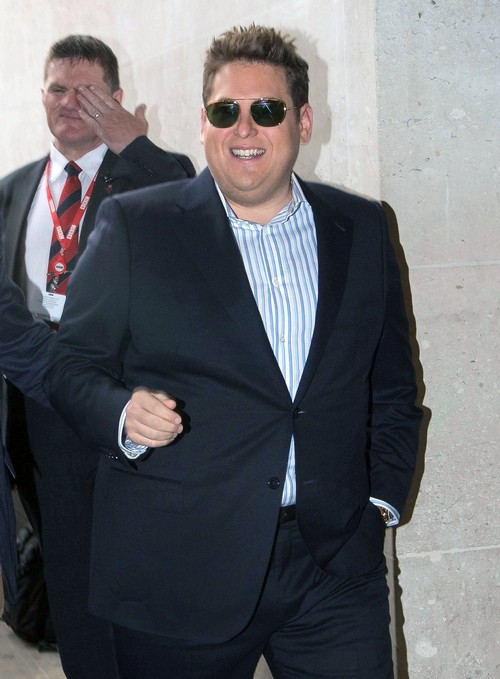 Ugh Jonah Hill. Jonah’s always teetered on the edge of the famous person a**hole meter, saying nice things one minute and then acting like an utter douchebag the next. The fact that all these wonderful and nice actors [Channing Tatum, Emma Stone, Brad Pitt] are constantly praising him and saying nice things about him always elevated him in most people’s minds, but this latest incident is unforgivable.

For those of you who don’t know, Jonah Hill was followed by paparazzi this weekend when he decided to throw a homophobic insult against them. For most of his walk, he didn’t pay any attention to the paparazzi, but one particular paparazzo wouldn’t let him, making fun of Jonah’s outfit and telling him, “I like the shorts though, bro. They are pretty sexy.”

Obviously, the paparazzo was making fun of Jonah, but enough for him to retaliate with a homophobic slur? When the paparazzo finally gave up and walked away with a simple ‘have a good day’, Jonah retaliated with, “Suck my d–k, you fa***t.”

Honestly, I’ve seen paparazzi behave much, much worse around major stars, and yet, those stars always manage to keep their head down and continue on with their day. What makes Jonah so entitled? He could even have told the paparazzi to politely leave him alone, or even swore at him normally, as Kristen Stewart is prone to do. But using a homophobic slur is not acceptable, plain and simple.

Of course, the immediate backlash forced Jonah to apologize, and he went on the Howard Stern show today and stated, “What I said in that moment was disgusting … I shouldn’t have said that.” Jonah claims that the paparazzi had been following him around and saying crap about his family all day, although we never see that in the video. Of course, the paps could be manipulating it so Jonah looks like the bad guy, but I still don’t think that’s an excuse for using that kind of insult.

Then, Jonah goes the Alec Baldwin route and claims he has a lot of gay friends and supports gay rights and he is not a homophobe. Yeah, you don’t have to be a homophobe to make homophobic remarks, dude. You just have to be an a**hole, and you just proved to the whole world that you are.