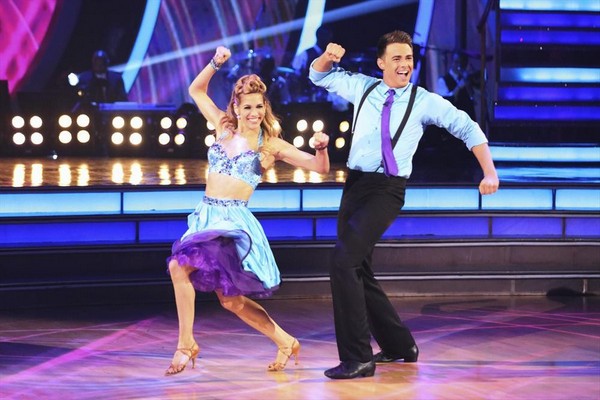 Tonight on the season 19 week 2 of Dancing with the Stars American actor Jonathan Bennett and his partner Allison Holer danced a Cha Cha Cha to “Sing” by Ed Sheeran.  On tonight’s episode the 12 remaining celebrities dance to their favorite songs #MYJAMMONDAY.  The show kicked-off with a spectacular opening number featuring the full cast and judges dancing to a medley of the judges’ favorite songs. Each couple will then perform a variety of dances, including the Cha Cha, Foxtrot, Jive and Rumba, to their favorite jam.  Did you watch tonight’s premiere episode?  If you missed it we have a full and detailed recap, right here for you.  If you missed any of tonight’s videos we have them all for you too!

On last week’s episode Jonathan performed a Jive and Carrie-Ann loved it saying, “I was blown away, your kicks were great”  The judges scored Jonathan a 30/40.  If you want to see his Jive from last week, you can check the video out here.

Jonathan Bennett and professional dancer Allison Holker: dancing a Cha Cha Cha.  Jonathan has been getting ready for his dance and tweeted about this week tweeting, “I’m so excited to show you our cha cha cha cha cha. Most people the cha cha we do the Cha cha cha cha cha. Cuz we are crazy.”

Judges’ Comments: Bruno: “The Rock and Roll idol tonight.  You did it very well.  It is true all the sharp angles are very good.” Carrie Ann: “I loved seeing this side of you.  But I honestly thought there was enough Cha Cha.”  Len: “I like sharp in the Cha Cha this was not sharp it was jerky.  Not enough Cha Cha Cha.”  Julianne: “I am going to say is that you guys are very consistent and you have a lot of potential to grow.  Keep doing what you are doing.”