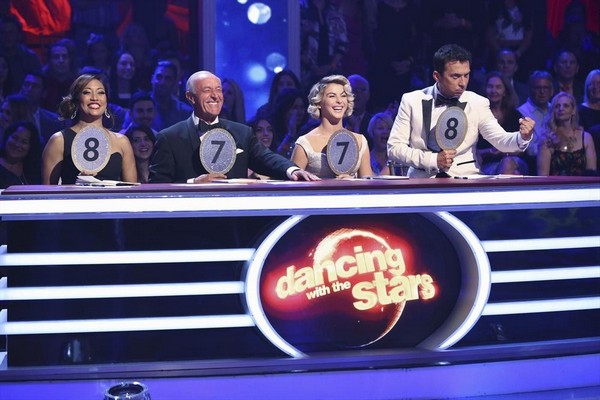 Tonight on ABC Dancing With The Stars returns with an all new Monday September 22, Season 19 episode 3. Tonight’s episode will be going into the second week of performances where the celebrities dance to their favorite songs.

On last week’s episodes the new contestants were dancing either a Cha Cha, Foxtrot or Jive and we had the dance assignments for you ahead of the premiere. Jive: Alfonso & Whitney; Jonathan & Allison; Bethany & Derek and Janel & Val. Cha Cha Cha: Antonio & Cheryl; Sadie & Mark; Betsey & Tony; Lolo & Keo; Michael & Emma and Tommy & Peta. Foxtrot: Randy & Karina; Tavis & Sharna and Lea & Artem. Lolo Jones sadly was sent home. Did you watch the last week’s episodes? If you missed the performance show, we recapped it right here for you and the results show right here for you.

Tune in tonight at 8 PM EST on ABC to watch the stars all hit the ball room. We’ll be recapping it for you live right here. In the meantime hit up our comments section and tell us who you are already rooting for?

Tonight’s show opened up with the cast and judges performing a dance to a song of their choosing – check out the video below!

Judges Comments: Len:  “You put me into a really good mood, but your footwork wasn’t good, well done though.”  Julianne: “What a great way to start the night, you need to watch your shoulders.” Bruno: “I think we could have a new hit action hero, plenty of satisfaction. Your energy and enthusiasm are in the right place.” Carrie Ann: “I am a little disappointed, there was underwhelming satisfaction.”

Judges’ Comments: Julianne: “That was not a traditional Foxtrot but I loved it. For future, you need to be more conscious about planting your feet on the ground.” Bruno: “You are hot to trot, the speed, the way you managed everything.” Carrie Ann: “I am so impressed with your versatility, it was close to perfect.” Len: “I thought the part in hold was lovely, you can really dance.”

Judges’ Comments: Bruno: “Viva la Lea you had the appeal of Ann Margaret in her prime, great technique you just missed a small pass.” Carrie Ann: “The ladies are killing it tonight. Your wild beast is all over the place that was so exciting.” Julianne: “You gave me chills. You held your own completely.” Len: “I expected that your Foxtrot was going to be good last week but I was concerned about the Jive but you were fantastic.”

Judges’ Comments: Carrie Ann – “The world needs more of what you got all you are is just joy you are so lighthearted.  However, I don’t see much of a Samba.”  Len – “You put the sin in syncopation.  It was wild and wacky.  I don’t know why I did like it.” Julianne: “J – “You definitely mastered the hip roll but it is the in between that you still have some lessons.”  Bruno:  “You must be the envy of all the men in the country you had the Bond girls around you.  It is hard to concentrate.”

Judges’ Comments: Len: “I know you had a tough week but it showed a bit.  I liked the concept.  It needed a bit more Cha Cha content.” Julianne: “I agree with the detail obviously the technique.  This felt like this was your jam.  The show must go on and you performed.” Bruno: “I like the vibe.  Cha Cha you have to be lighter on the feet.” Carrie Ann: “I don’t think you performed bad at all.  A few little offs but I was impressed.  That was your jam.”

Judges’ Comments: Julianne: “You’re great because you have the Alfonso groove.  I’m not telling you to get rid of it.  I am looking for you to get more Samba groove.  I want to see the ballroom groove.” Bruno: “You’re personal style is unique and extraordinary.  Julianne is right your performance is astonishing.” Carrie Ann: “You lost connection a bit.  Costume malfunction.  A solid performance.” Len: “You were popping like buttons on a tight shirt.  Next week is the waltz.  I want to see you in the ballroom.”

Judges’ Comments:  Bruno: “Foxy Bethany I loved it.  That was a Bob Fossi Foxtrot.  You did well” Carrie Ann:  “I am loving you are starting to tell a story.  You are a great storyteller, good routine.”  Len: “I don’t blog that was a great number, best I’ve seen tonight.”  Julianne: “That was your jam that was awesome.”

Judges’ Comments: Carrie Ann: “All hail Queen Betsey.  You are exquisite.  What a transformation.”  Len: “Last night was a night to forget, tonight is a night to remember.  Betsey I have never seen you look so great.  Well done!”  Julianne: “It was simple and elegant and timeless.”  Bruno:  “Rebirth and revived glamour Queen of the night, you are ready for your close-up.”

Judges’ Comments: Len: “Don’t over analyze these dances.  There are no secrets you just have to better the following week and you were.”  Julianne: “This was so good.  I am really impressed and the connection was beautiful.”  Bruno: “The Latin lover is starting to smother.  It was never forced.  You have a nice butt.”  Carrie Ann: “Subtly that is the approach.  You were totally in the element.  Watch the arm that is in hold.  Other than that sexy and smooth.”

Judges’ Comments: Julianne: “The only way to describe it is a bunch of “F” words.  It was fun and fast, foot  work was fast  It was fabulous.”  Bruno: “We can party like 1969.  Honestly you are really proving age is a state of mind.”  Carrie: “You are the first man to open the bare chest.  You are smooth and you dance right in the poicket of the music.”  Len: “I was overdosed on fun.  76 still working your assets.  Well Done!”

Judges’ Comments: Bruno: “The Rock and Roll idol tonight.  You did it very well.  It is true all the sharp angles are very good.” Carrie Ann: “I loved seeing this side of you.  But I honestly thought there was enough Cha Cha.”  Len: “I like sharp in the Cha Cha this was not sharp it was jerky.  Not enough Cha Cha Cha.”  Julianne: “I am going to say is that you guys are very consistent and you have a lot of potential to grow.  Keep doing what you are doing.”

Judges’ Comments:  Carrie Ann: “I think my maternal side is coming out.  Was your Dad okay with that routine.  I thought you killed it.”  Len: “I like the fact that your jam took it back to your roots, but it did not jell for me.”  Julianne: “You are a natural performer you hit it hard.  The thing that is so special you have amazing technique.  I missed that tonight.” Bruno: “That was great my darling.”

That is it for tonight, don’t forget to come back tomorrow to find out which celeb is sent home!