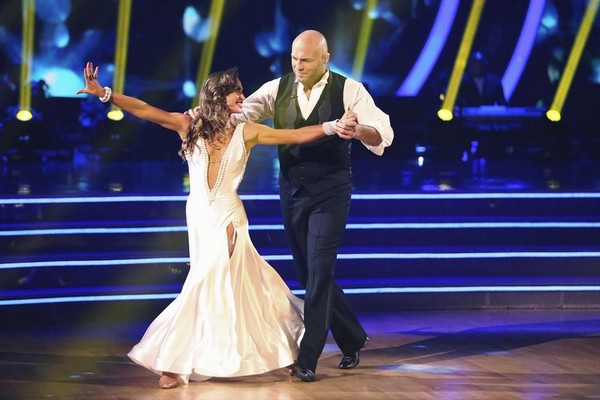 Tonight on the season 19 week 2 of Dancing with the Stars actor and MMA fighter Randy Couture & his partner Karina Smirnoff danced a Cha Cha Cha to “Satisfaction (I Can’t Get No)” by Otis Redding.  On tonight’s episode the 12 remaining celebrities dance to their favorite songs #MYJAMMONDAY.  The show kicked-off with a spectacular opening number featuring the full cast and judges dancing to a medley of the judges’ favorite songs. Each couple will then perform a variety of dances, including the Cha Cha, Foxtrot, Jive and Rumba, to their favorite jam.  Did you watch tonight’s premiere episode?  If you missed it we have a full and detailed recap, right here for you.  If you missed any of tonight’s videos we have them all for you too!

On last week’s episode Randy performed a foxtrot and Carrie-Ann loved it saying, ““I got a little weak in the knees, you were sexy out there, you were fluid and poetic.” The judges scored Tommy a 31/40.  If you want to see his Foxtrot from last week, you can check the video out here.

Randy Couture and professional dancer Karina Smirnoff: dancing a Cha Cha Cha.  Randy has been busy this week and has not been saying much about his dance but his partner Karina tweets, “The Rainbow Warrior has conquered #AllTheSingleLadies xcnatch Can’t wait till Monday?”

Judges’ comments: Len: “You put me into a really good mood, but your footwork wasn’t good, well done though.” Julianne: “What a great way to start the night, you need to watch your shoulders.” Bruno: “I think we could have a new hit action hero, plenty of satisfaction. Your energy and enthusiasm are in the right place.” Carrie Ann: “I am a little disappointed, there was underwhelming satisfaction.”