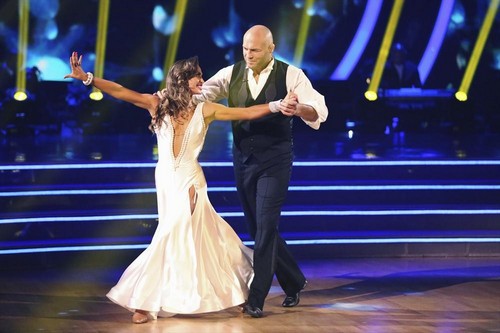 Dancing with the Stars Season 19 features Randy Couture who in many ways might prove to be a huge threat to capture the DWTS Mirror Ball Trophy and win! For a man that makes a living with his fists, Randy Couture sure is light on his feet. Who knew the MMA Champ would make such a splash in his debut on Dancing WIth the Stars alongside beauty Karina Smirnoff? This guy actually glided across the dance floor and quickly made believers of the audience and more importantly, the judges. Couture has always excelled at everything he has tried competitively, so it really should not come as a huge surprise.

What makes it so interesting is that Couture showed a softer side to his personality. Couture has always been the quintessential tough guy. To come out on National Television, do a form perfect foxtrot and keep that toughness incheck is an interesting mixture. While he was graceful throughout the dance and nearly perfect in form, he still kept his tough guy persona intact. The mixture of power and grace was rather enchanting and blew away the crowd that was in attendance. In fact, they gave Couture and Smirnoff a standing ovation.

While the foxtrot is a challenging dance to be sure, there will be tougher challenges in the weeks ahead if Couture hangs in there and stays in the competition. Particularly interesting will be when he is given the quick step or jive, his bulk will absolutely get in the way if he is not careful. Muscles are great and all, but these dances require flexibility. Randy certainly can develop such skills and given his determination I would not put that past him for a minute.

So the original question is, can Randy actually win the Mirror Ball Trophy on Dancing With the Stars?

My short answer and opinion is that he absolutely can. Many athletes before him have done so and they tend to be crowd favorites. The crowd response for Couture clearly showed that he has a ton of support out there and that goes a long way. If Smirnoff keeps him focused and does a nice job of covering up a lack of flexibility in the quicker dances, Couture could be a favorite to go all the way.

The other primary reason I give Couture a great shot at the trophy is because of his dedication and work ethic. To become an MMA champion, you have to be willing to do whatever it takes to win. Long hours training and practicing will not phase him in the least. He will put in the time. Smirnoff is also known for wanting to win badly. This combination of factors means that I believe Randy Couture will outwork every celebrity on that show. Hard work tends to pay off, right?

Besides…who is actually going to vote the guy off?