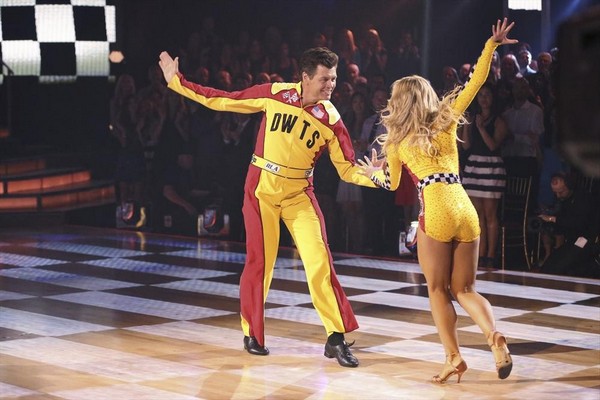 Tonight on the season 19 week 2 of Dancing with the Stars Professional Race Car driver Michael Waltrip & his partner Emma Slater danced a Samba to “Girls In Bikinis” by Lee Brice.  On tonight’s episode the 12 remaining celebrities dance to their favorite songs #MYJAMMONDAY.  The show kicked-off with a spectacular opening number featuring the full cast and judges dancing to a medley of the judges’ favorite songs. Each couple will then perform a variety of dances, including the Cha Cha, Foxtrot, Jive and Rumba, to their favorite jam.  Did you watch tonight’s premiere episode?  If you missed it we have a full and detailed recap, right here for you.  If you missed any of tonight’s videos we have them all for you too!

On last week’s episode Michael performed a Cha Cha Cha and Julianne loved it saying, “That was awesome, you looked like you had so much fun.”  The judges scored Michael a 25/40.  If you want to see his Cha Cha Cha from last week, you can check the video out here.

Michael Waltrip and professional dancer Emma Slater: dancing a Salsa.  Michael has been getting ready for his dance and tweeted about this week’s dance, “It’s fixin to get real up in here! Please vote for us tonight.”

Judges’ Comments: Carrie Ann – “The world needs more of what you got all you are is just joy you are so lighthearted.  However, I don’t see much of a Samba.”  Len – “You put the sin in syncopation.  It was wild and wacky.  I don’t know why I did like it.” Julianne: “J – “You definitely mastered the hip roll but it is the in between that you still have some lessons.”  Bruno:  “You must be the envy of all the men in the country you had the Bond girls around you.  It is hard to concentrate.”