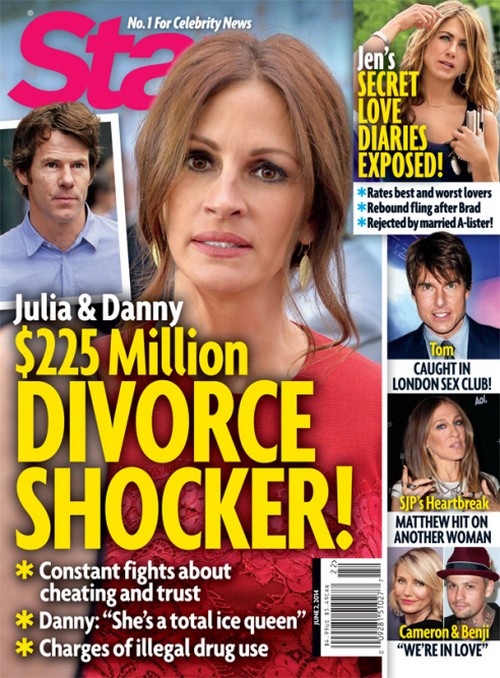 Twelve years is a long time to maintain a marriage in Hollywood and for awhile there it was starting to look as though Julia Roberts and Danny Moder would beat the odds that were stacked against them. However since Julia’s step-sister, Nancy Motes took her own life back in February it has just given the couple one more thing to fight over. As it was there has always been a level of distrust within the relationship because Danny was married to another woman when he first hooked up with Julia so somewhere in the back of her head she has expected him to cheat.

Julia’s suspicious nature has led her to treat Danny like a child for the last twelve years. She has kept him at her side while checking his phone and emails for any hint of another woman. Obviously Danny has gotten fed up with the treatment but according to the June 2nd print edition of Star Magazine watching how heartless his wife has been towards Nancy in recent months has made him rethink everything. Sources say that he never agreed with her treatment of Nancy in the first place and seeing how it lead to the woman taking her own life was just crushing to him.

Now the fighting between the couple has reached epic proportions and it is actually Danny that is rethinking the kind of marriage that he signed up for. He may have married an actress known as America’s Sweetheart but the wife that he gained is as cold, calculating and as heartless as it gets. Sources say that the marriage has been shaky for awhile but that recent events have made it unlikely that they will stay together. Do you think that Julia deserves to be kicked to the curb for her treatment of people in general? Tell us your thoughts in the comments below!