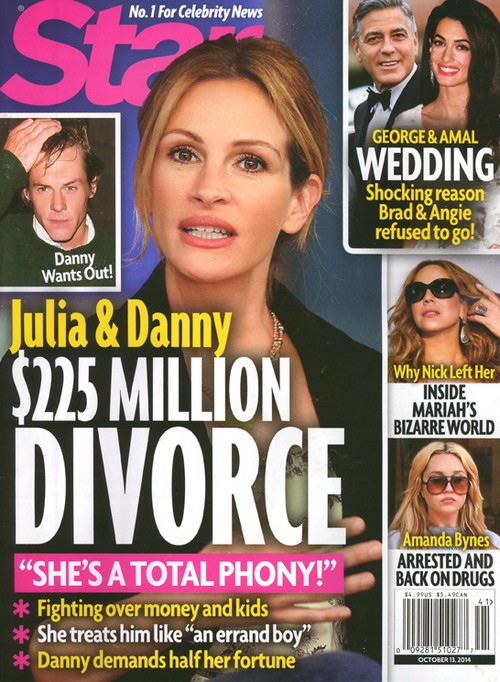 Julia Roberts and her husband, Danny Moder, are reportedly on the verge of a $225 million divorce. Is it just me, or does it seem like the tabloids always pull a random number out of their ass when talking about celeb divorces? Do they just spin the wheel and choose the number based on where it lands? Julia Roberts is not worth $225 million, and in fact, most figures peg her net worth at half of that.

Either way, Star Magazine’s cover story is devoted to Julia Roberts’ divorce from Danny Moder, her husband of 14 years. I would totally be down to believe this story, except Star is basing their entire assumption on a picture where Julia and Danny look unhappy. Um, show me any couple that’s been married fourteen years that looks blissfully happy in every single photo ever taken of them, and I’ll give YOU $225 million dollars.

Then, Star also has an interesting story about the wedding of the week, George Clooney and Amal Alamuddin. Almost everyone has covered the most notable absences from the wedding, a.k.a. Brad Pitt and Angelina Jolie. Why did the Brange fail to make an appearance at George’s wedding? According to Star, it’s because they didn’t want to be a part of the ‘circus’. According to common sense, it’s because Brad Pitt and George Clooney are just not that tight, contrary to the media’s obsession with their friendship. I do have to point out that in contrast to the simplicity of the Brangelina wedding, George Clooney’s wedding looked like the tackiest affair ever.

There’s also some hogwash about why Nick Cannon left Mariah Carey, which the magazine tries to blame on Mariah’s weird lifestyle hacks. But we all know that it’s likely because Nick is a philandering douche of a husband, and Mariah just got sick of it.