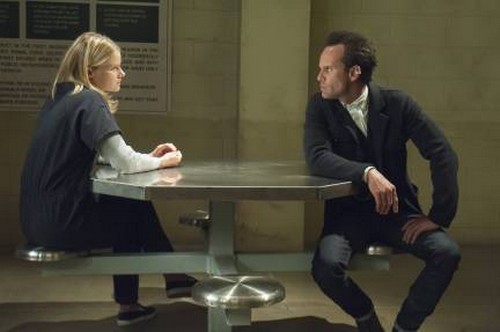 Tonight JUSTIFIED returns to the FX with a whole new episode called, “Over the Mountain.”  On tonight’s episode Boyd’s last living relative threatens his life and livelihood.  Did you watch last week’s season 5 episode 2?  We did and we recapped it right here for you.

On last week’s show Raylan was king for a day in the seized mansion of a notorious mob accountant, while Boyd tried to regain his stranglehold on the Harlan heroin market.  Written by Benjamin Cavell; directed by Dean Parisot.

On tonight’s show can you believe we are already three episodes in?  Raylan ventures into wild country on the hunt for a missing informant, while Boyd’s last living relative threatens his life and livelihood.

Tonight’s Season 5 episode looks like it is going to be great and you won’t want to miss it, so be sure to tune in for our live coverage of FX’s  Justified at 10:00 PM EST! While you wait for our recap hit the comments and let us know how excited you are about the new season of Justified?

On tonight’s Justified, Dewey makes Messer dig a grave, he’s unaware it’s for him. Messer stands up to find Dewey pointing a gun at him, Dewey fires, hitting Messer in the abdomen region. The two men fight, then Dewey gets the better of him and beats him to death with Messer’s own shovel. The shovel breaks, but Dewey tries to use it anyway to finish digging Messer’s grave. Dewey goes to the truck to find another way to dig the grave, but when he comes back, Messer’s gone. Messer sneaks behind Dewey and shoves him off the small cliff they are near.

Raylan learns that Messer is a CI for the department, spying on Boyd. Art tells him that his new assignment is to find Messer, who’s gone AWOL. Art tells Raylan that Tim will be accompanying him. Meanwhile, Dewey wanders in the wilderness, with no phone service. Boyd visits Johnny and Ava at the jail. Johnny asks why Boyd had him come to the visitation, Boyd tells him that Johnny needs to make reparations for his actions against Crowder. Johnny thinks Boyd owes him for taking a bullet for him. Boyd disagrees, but tells Johnny that he wants to set aside their differences to make a profit. Johnny tells Boyd he didn’t come to see him, he came to see Ava, and the meeting is done. He also says that Boyd should’ve done right by him. Before he leaves, he tells Ava he’s coming for her. Boyd leaves as well, without speaking to Ava.

Raylan arrives at Dewey’s business looking for Messer. The women aren’t happy to see him, but he has a search warrant. Raylan meets Kendall, Messer’s brother. Tim finds a phone belonging to Messer, but Raylan doesn’t believe it’s the one he’s been using. Back in the wilderness, Dewey prays to the Lord for deliverance. He asks Jesus to help him find Messer so he can kill him, then he’ll straighten up and go to church. Just as he tells Jesus how he’s never asked him for shit, he spots fresh blood on a rock. Raylan and Tim arrive at Messer’s house, but he’s not there. Tim asks why Raylan’s not more excited about find Messer. Tim open’s Messer’s door, and two angry pit bulls run out. Tim and Raylan jump on top of the cars, just as Danny Crowe comes out in his underwear. Tim asks Danny how he came to be living in Messer’s house. He says he’s just staying there for awhile, but they’re welcome to have a look around. Dewey finds Messer, who doesn’t appear to be doing too well, but he’s still alive. Dewey is about to kill Messer, but is interrupted by a family on a hunting trip. Messer wakes up just in time to see Dewey leaving with the family. He calls for help, but Dewey covers his cries by screaming, and pretending to be in pain. The family rushes him onto their atv’s and leave the wilderness. Back at Dewey’s business, Danny asks Kendall and the bartender about what’s going on with Dewey and Messer. Danny takes charge in finding Dewey and taking care of the business.

At the jail, Ava is cornered by a short, douche-y cop who wants to know why Ava was smirking when he came to her cell. She makes a short joke, which pisses him off. He tells her to take her clothes off and bend over. She responds by grabbing him by his throat but he gets the better of her. Just as he tries to force her to disrobe, a female guard appears. He plays it off by saying Ava was resisting his demands. Meanwhile, Raylan pays Boyd a visit. Boyd is holding a firearm, which Raylan points out he could throw him in jail for. Raylan asks Boyd about Messer. Boyd, of course, denies knowing anything about Messer. Raylan suggests that if Messer is found dead, Boyd could go down for the crime. Finally, Boyd agrees to give Raylan Messer’s other phone number. Raylan asks Tim to babysit Boyd while he checks out the number. Meanwhile, Art receives a call from Detroit about his case. Back at Dewey’s, Daryl finally hears from Dewey, who’s at the hospital. Raylan tracks Messer’s phone GPS to an out of the way bed and breakfast. Dewey tells Daryl that Messer was still alive when he left. Daryl informs Dewey that they have to go find him and finish the job. However, when they arrive, cops are swarming the area. Raylan has found Messer, who’s passed away.

Raylan informs Boyd that they’ve found Messer dead. At the jail, the female guard attacks the male guard who tried to force himself on Ava. She makes him promise he’ll never try anything again, by holding a lit cigarette to his eye. Meanwhile, Daryl hides Dewey, who feels Daryl is holding him hostage. He also blames Daryl for his troubles, since he was the one who suggested he kill Messer to begin with. Daryl tells him he made him do it to prove he’s a real Crowe. Boyd and his cronie spy on Monroe, they are planning to take him down. Raylan returns to the station, and shares with another detective that he believes the Crowes are responsible for Messer’s murder. In Detroit, Art visits with an inmate there, whom he believes that he know something about Nicky Augustine’s murder. Art finally gets a name out of the inmate-a guy named Picker, who’s actually staying in Kentuck with Wynn Duffy. Since the inmate is Canadian, Art suggests to the detective in Detroit to send him back across the border. Meanwhile, Allison tells Raylan about a child she took out of a home, who had been chained to a radiator in the garage by his father. She says the father tried to kill her because she took the child, and would have succeeded if the police had not been there. After telling Raylan about her day, she asks him to spend the night with her at her place.

Mooney presents Lee with a hand that he claims belongs to Boyd. After Mooney leaves the room, Mara asks Lee if he still wants to pursue a case against Ava, he says yes. Raylan arrives at Dewey’s business again, to question Daryl about Messer’s disappearance. Daryl refuses to admit anything, so Raylan tells Daryl that he and his crew need to pack up and leave the place. Daryl refuses, so Raylan tells him that he’s taking Kendall, the teenager, into protective custody. Daryl threatens to kill Raylan, Raylan dares him to try. Just as things are about to get violent, Kendall speaks up and tells Daryl he’ll go with Raylan. Boyd’s cronie brings him to the place where he’s been keeping all the dead they’ve killed recently.