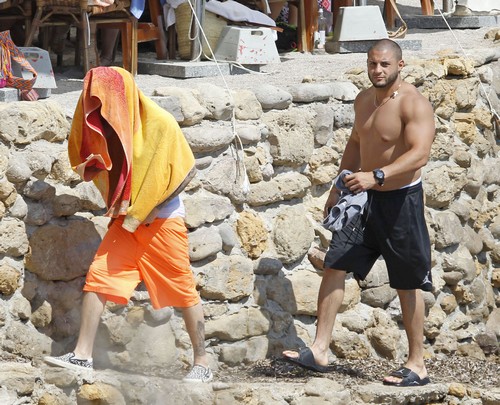 Justin Bieber and Kendall Jenner are getting cozy, aren’t they? Good riddance, they deserve each other. I’m surprised it took them this long to get together, but ever since Justin’s breakup with Selena Gomez and Selena’s falling out with the Jenner sisters, it’s been inevitable that Justin would hook up with one of them – if only to get back at Selena.

Even though Justin had been linked to Kylie Jenner in the past, knowing Justin, he was probably holding out hope that Kendall would show interest in him eventually. And now that she has, he’s taking advantage of it and flaunting their relationship for everyone to see – particularly, Selena.

Justin and Kendall partied together at Riccardo Tisci‘s 40th birthday party in Ibiza, with a source telling the Sun, “Kendall and Justin were inseparable for most of the night. They were seriously flirting and kept going in and out of a photo booth together. After partying for about two hours, they quietly slipped out of the party together and were seen holding hands.”

Oh, Selena’s going to go nuts when she finds out about this. She’ll probably progress from wearing ass-crack revealing shorts to just wearing plain underwear to get attention, all the while Justin is flaunting his new romance on Twitter and Instagram. Plus, Kendall’s such a famewhore that even if she wasn’t attracted to Justin, she would date him just for the attention. She knows that he doesn’t necessarily have the most positive spotlight on him right now, but to all the Kardashians, there’s no such thing as bad publicity. Attention is attention, and Kendall will date Justin if it means that she gets to keep the spotlight on her.