Justin Bieber And Selena Gomez Together in Dance Studio: Collaboration Song Duet On The Way (VIDEO) 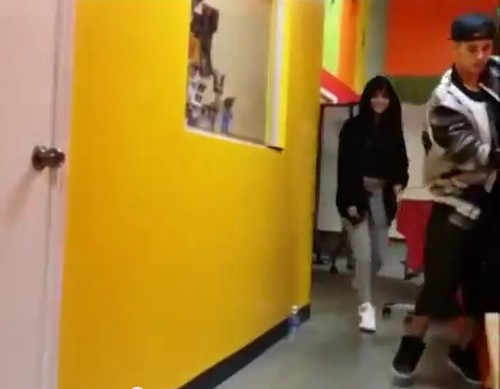 A week ago if someone were to tell you Justin Bieber and Selena Gomez were back together, you probably would have laughed in their face. But, apparently hell has frozen over, and Justin and Selena have reconciled. And, it gets better. Despite the fact that Justin cheated on Selena with numerous women (Chantel Jeffries, Miley Cyrus, Katherine Gazda, Barbara Palvin and a gaggle of strippers and prostitutes), they appear to have mended their relationship, and are working on a new single together.

After their make-up breakfast yesterday in Texas, the dynamic duo headed to Action Dance Studio to work with a choreographer on their new music video. So far they are keeping the project top secret, and the studio even went as far as to lean gymnastic mats up over the doors so no onlookers could peek inside and see what they were working on. After Justin and Selena, worked with the dance choreographer for two hours, they thanked the dance studio and were on their way. In the video below you can even see Bieber moving the huge mats off from their studio’s door while Selena followed closely behind him with a hood on.

Selena and Justin may be a lot of things (immature, arrogant, drug-addicts, self-absorbed, and the list goes on and on), but one thing is for sure, they have some serious heads for business. A Justin “Bizzle” Bieber and Selena Gomez collaboration would be a goldmine for the troubled singers right now. A few bars by Justin about his “bad boy” ways, and chorus by Selena about how much he hurt her, while they bump and grind on a romantic beach somewhere screams dollar-signs.

How do you feel about Justin and Selena’s whirlwind reconciliation, are you as disappointed in Selena as we are? Do you think their new single will ever see the light of day, or will they break up again before they finish it?