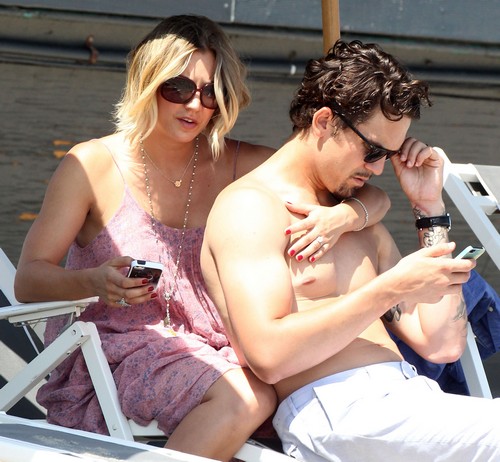 Perhaps Kaley Cuoco and Ryan Sweeting shouldn’t have made such a fast dash for the alter. Only 6 months after tying the knot the couple is finding out that they might not be such a fabulous match after all. The two have begun fighting in public which means it’s probably a whole lot worse behind closed doors. According to the June 30th print edition of Star Magazine the couple recently attended an engagement party for one of Ryan’s friend’s and things turned ugly fast.

Apparently Kaley didn’t know many people there and expected Ryan to hover over her. When he didn’t she got upset and Ryan made the mistake of telling Kaley to relax- then all hell broke loose. Sources say that a pattern has emerged in the relationship that leaves Kaley looking like a jealous monster. She wants Ryan’s undivided attention all of the time and when he focuses on anyone else she loses it. Ryan doesn’t know that many people in L.A. So he has befriended those that Kaley has introduced him to and it has caused problems. If Ryan talks to another woman he is instantly accused of flirting with them and a fight ensues. To make matters worse, according to OK! Ryan is ‘friends’ with Zooey Deschanel and Kaley is loosing her mind with insecurity over this relationship.

Fighting in public is never a good sign of the status of a relationship. How long do you give Kaley and Ryan’s marriage before we hear of a split? Do you think that there’s any chance that these two will actually end up together for the long run or will this one end as quickly as it began? Tell us your thoughts in the comments below!