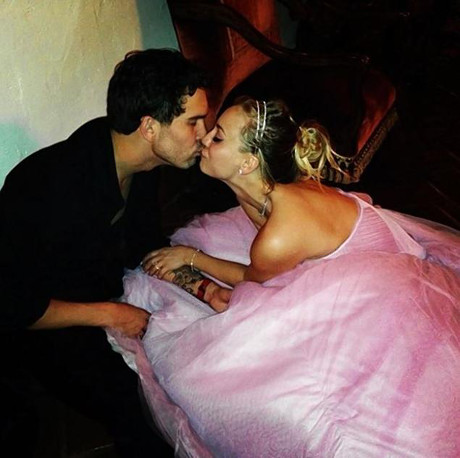 Is skipping the honeymoon a thing now? In their first weekend of married life, Kaley Cuoco and Ryan Sweeting chose to be at a Lakers game where the new hubby was spotted looking miserable, according to Fishwrapper. The couple were married on New Year’s Eve and now six days later we unfortunately spotted a sad looking newlywed. It smells like trouble is paradise and it hasn’t even been a week. Married life is definitely not for everyone and yet people tend to agree the honeymoon stage should at the very least be the best part.  And okay, sure Ryan might have gotten upset over his game, but to be honest why are those two even out in public? No one expected them to come up for air this soon.

Kayley met her future husband not long after she and Henry Cavill ended things.  Despite this Ryan didn’t seem like a rebound. The couple however surprised us in their seriousness by getting engaged after only three months.  At this point I felt they needed a cooling stage. Just in case they were rushing into things. This could have easily been available if they had a long engagement, but they did not. They had a short engagement and married after three months.  By this point it’s starting to look like almost everything happens for them within that time frame. So much so that I’m afraid of what’s next.

Please not a baby or a divorce. They need to take so time for themselves and to be fair with such a short relationship; it possible they haven’t found each other faults yet. This stage is supposed to be all smiles and inappropriate public groping. Instead what do we get? An unhappy Ryan that frankly should have taken his wife away for the weekend. Kayley may have had to shoot extra scenes for her hit show and this could be why they have to stay in LA, but someone should have told him “it’s the freakin weekend baby I’m about to have me some fun”.