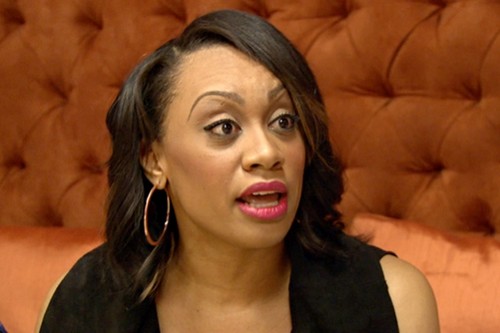 Tonight on Bravo get ready for Kandi Burguss’ RHOA spinoff called, Kandi’s Wedding. The show airs with a new episode called “Mother Tucker.”  On tonight’s episode With only two weeks left until they exchange vows, Todd’s mother Sharon is scheduled to arrive from New York and the timing couldn’t be better for marital advice, as Sharon is understandably upset over Momma Joyce’s accusations towards her son.

On the last episode Kandi’s wedding planning team recovered from Carmon’s emotional exit, but it’s not clear if Kandi and Todd could recover from Momma Joyce referring to Todd’s deceased father as a “pimp.” Kandi met with her father and asked him to officiate her wedding, but got more than she bargained for when he dredged up family issues from the past. In an emotional sit down with Momma Joyce, was Todd able to stand up for himself?  Did you watch last week’s episode?  If you missed it we have a full and detailed recap, right here for you.

On tonight’s episode with only two weeks left until they exchange vows, Todd’s mother Sharon is scheduled to arrive from New York and the timing couldn’t be better for marital advice, as Sharon is understandably upset over Momma Joyce’s accusations towards her son. Tensions rise as Kandi and Todd debate whether having their mothers meet each other before the wedding is a good idea. Meanwhile, as the Matron and Maid of Honor compete for their best friend’s affection, the situation reaches a boiling point.

Tonight is going to be a fun episode of Kandi’s Wedding for sure and you’re not going to want to miss a minute. Tune in at 8Pm EST on Bravo and we’ll be recapping it right here for you but in the meantime, hit up the comments and let us know your thoughts on the new Spinoff?

With the ways things are and how they’re going to be (like Todd constantly saying he’ll walk away everytime Mama Joyce opens her mouth) this marriage is going to need all the help it can get. Thankfully the engaged couple knows this and so they pursued counseling prior to the ceremony. They went to their spiritual advisor who mercifully was not Kandi’s dad (firmly anti-Mama Joyce) and were able to talk through some of their minor squabbles.

However, Todd doesn’t like the way his future mother-in-law continues to have free reign to say whatever she likes. He and Kandi have talked about this and yet they never get anywhere in getting her mother to stop. And because Kandi doesn’t like getting caught in the middle – she’s doing her best to avoid all confrontation and that’s forcing other people (namely Todd and his family) to hold in their tongues.

Though the good times don’t seem to stop there. Things are about to get a little more hectic what with Todd’s mother coming down to help with the final planning for the wedding. And the reason why her visit can’t be considered a happy occasion has to do with Mama Joyce as well. The other woman called Todd’s parents a pimp and a prostitute. But Todd and his family only know about half of that. So there’s bound to be fireworks when they hear the full tirade.

Todd’s father died when he was very young and he never knew the man. So Mama Joyce’s comment hit him, this time, far below the belt. And his mother will most definitely want to protect her son from what’s quickly starting to look like a full-scale assault.

Besides this never-ending drama, her mother is causing with Todd and her mother-in-law, there’s also trouble among her bridesmaids. Her two best friends don’t like each other and their digs are starting to get in the way. It made for an uncomfortable cake tasting session and dress rehearsal. But Kandi, luckily, was not at the bridesmaids sit-down. There Tan and Carmon got into a fight over Mama Joyce of all people.

Tan wanted Carmon to apologize to the other woman just to make peace. Although her reason for this request was more about getting Carmon to humble herself than it was to help Kandi. And Carmon saw it for what it was. She had made snide remarks towards Tan all day long and she knew that Tan wanted to come out of their childish feud looking like the better person.
Before those two could erupt into a fight though the other bridesmaids stepped in and broker a ceased fire. They had to remind those two that the only important person in all of this is Kandi.

Now if only the same bridesmaids could have been at the family dinner. Kandi, despite her instincts telling her not to do it, let Todd call a family dinner with both their mothers in attendance. Mama Joyce’s sisters also tagged along. And seeing as they promised to keep their little sister in check, Kandi had thought they would be able to handle her mother – she was wrong!

Only one of the aunts actually likes Todd’s mother. While the other one finds Todd’s mother to be too talkative and slightly annoying. So they kind of equaled each other out leaving Mama Joyce to be her same old cranky self.

She was making double sided comments about not being allowed to stay over knowing that Todd’s mother was staying at the house till the wedding was over so technically she was asking why she wasn’t being treated in the same manner as say “others”. The “others” being Todd’s mom whom she barely acknowledged since arriving for dinner.

And that led to the fight. Because, unlike everyone else, Todd’s mom was prepared to leave her seat just as much as Mama Joyce was. They both got up and Todd’s mother got a quick push in before the two ladies were separated.

Todd’s mom is no joke. She got up out of her seat and was prepared with name-calling and for a physical fight. And this made Todd later say that this dinner was a “7 out of 10”. He gave it that rating because this was the first time someone stood up to Mama Joyce. Which was the real reason he wanted the family dinner to begin with!